Showing posts from November 3, 2018
Show All 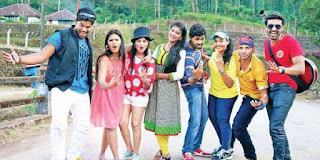 The film, directed by Kranthi Prasad, is set in a jungle where supernatural events take place in a saga of revenge and greed. The story revolves around 4 pairs of boys and girls who go on a trip to a house in the middle of a forest. There they encounter a ghost, seeking revenge on one of them, for past misdeeds of his forefathers. Do they come out unscathed forms the story. The director has added in bits about yoga, the power of meditation and spirituality in controlling destiny and evil forces, via one of the characters  in the film. The youngsters have tried to show a sense of bonhomie in the situations provided by the script. However, the CG attemps leave much to be desired and the story seems predictable, with some situations looking forced and the attempts at comedy and horror,  weak. The message he has tried to convey seems interesting but could have been handled differently to make it entertaining.
Read more
More posts