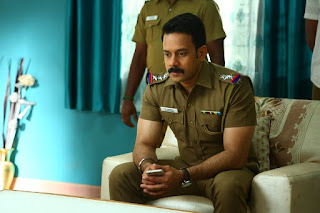 By Rinku Gupta A thriller directed by debutant Sri Senthil ( of the famed Naalai Iyakkunar show ), Kaalidas stars Bharath, Adhav Kannadasan, Ann Sheetal, Suresh Menon, Velraj and Priyadarshini. Bharath is Kaalidas, an upright, hardworking cop whose wife  ( Ann Sheetal perfectly cast,  in a  wonderful, layered performance) is disgruntled because he never has any time for her.  In the midst of this martial discord,  Kaalidas is caught up in the imvestigation of a series of murders ( or is it suicides) of women. Suresh Menon is the IPS officer who works on the case with him and the team stumble on a series of clues. In the midst of all this,  a stranger ( Aadhav Kannadasan in a good role that he plays out superbly) enters as a tenant in  Kaalidas' home. Who is this person? Is he linked to the crimes? Does Kaalidas solve the crimes? The whodunnit thriller has many things going for it. For one, the casting is amazing.  Suresh Menon, Velraj, Bharath and even the junior cops,  are
Read more
More posts