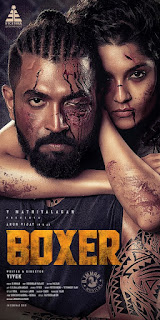 by Rinku Gupta The Sahoo actor Arun Vijay is on a roll these days. Currently shooting in Russia for Agni Sirugugal with Vijay Antony and Akshara Hassan, the action hero has completed Karthick Naren's Mafia.  His super hi- octane action film Boxer, is under production.                         Arun Vijay in the Ad Now the actor has entered another another  arena as well, that of advertising. With so many action adventure movies and roles under his belt, its no wonder that the advertisement industry has woken up to see his potential. The actor has been signed on for a leading apparel brand and features in an ad which showcases his action adventure image. The actor made an announcement on social media about his foray into the ad world. He wrote,''My first step into advertisement is  here!!" A clip of the ad showed him saving a child hanging precariously from the ledge of a building, re - inforcing his screen action hero image. Even off screen he is
Read more
More posts