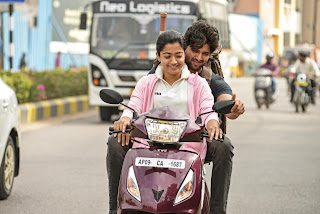 By Rinku Gupta Dear Comrade, directed by newbie Bharat Kamma is produced by Mythri Movie Makers and  stars Vijay Deverakonda and Rashmika Mandanna. Chaitanya aka Bobby ( Vijay) is an active student leader in college who gets into violent scuffles at the drop of a hat. This habit of his alarms his visiting neighbour Lilli ( Rashmika) when she gets to know him better. But while Bobby falls for her, initially she refuses his love as her passion lies in cricket. But thanks to his convincing ways, she finally reveals that she is attracted to him and the duo get into a relationship ( some great chemistry there, a love innocent, deep and powerful). However, his violent habits get in the way and when he refuses to give them up and pushes her away, she leaves him, hearbroken. The break - up affects him greatly, but he learns to channel his energies into a new path. Cut to 3 years later when Bobby returns into her life quite by chance. A tragedy has befallen her and he now takes it upo
Read more

- July 26, 2019
A1 directed by Johnson K and produced by Circle Box is the next film of comedian turned hero Santhanam. The story is about a young man Saravanan ( Santhanam) a local guy who happens to run into Divya ( Alisha Berry) one day quite by chance. He is mistaken by her to be a brahmin like herself and she decides to fall in love with him because her strict father will not allow her to marry out of the community. When her family finds out that he is a local Chennai chap, they refuse to accept him as a mapillai. But true love finds it way via the strangest situations. Saravanan is challenged by his girlfriend to find even 1 flaw in her exemplary father, in order for him to be accepted into the family. Our hero tries his best to win his lady love but things begin to only get bleaker. Does he succeed? Santhanam and Aisha make a good pair and thier constant banter makes for a lively watch. The 3 friends of his are well cast and thier steady stream of witty comments and counters ensure
Read more
More posts