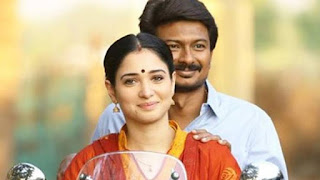 by Rinku Gupta  Kanne Kalaimaane is Seenu Ramasamy's next film, starring Udhayanidhi and Tamannaah and produced by Red Giant Movies.In this rural subject, Udhayanidhi plays a farmer called Kannan who runs an organic farming enterprise and helps  people in the village. His habit of borrowing loans for poor villagers from the village bank lands him under the lens of the new upright, honest bank manager Bharathi ( Tamannaah). After some initial friction they both are drawn to each other's qualities and decide to get married  How do Kannan's grandmother  ( vadivakkarasi) and father  (poo Ram) both of  whom he worships, react to having a working daughter-in-law  from another community? How do the couple overcome hurdles in thier life forms the story which has an unexpected twist hidden away as well.  This is easily Tamannaah's career best performance. Restrained and nuanced she subtly conveys  more with her eyes and expressions. She looks beautiful  in crisp saris
Read more
More posts