- April 12, 2019
by Rinku Gupta Directed by CV Kumar, as the title suggests,  the film is about a war between two gangs and how an innocent couple become victims of thier machinations. In brief, the story centres around a brave and feisty girl,  Jaya aka Razia ( Priyanka Ruth) who converts to marry Ibrahim ( Ashok Kumar). He works as an accountant in a drug lord's office.  She is unaware of the nature of his boss' job till the day Ibrahim  gets shot in a police encounter. She learns  that his boss wanted a scapehoat and tipped off some cops to shoot her husband by framing him in a drug dealing case, when they needed someone to show an  encounter. Shattered by the destruction of her idyllic world she now has only 1 highly ambitious and seemingly impossible goal. To eliminate the 3  top gang men responsible for her situation. She goes to Mumbai to seek help from a rival gangster  Boxie ( Daniel Balaji). Does she achieve her goals? At what cost? Is she used as a pawn in the bargain? Ku
Read more 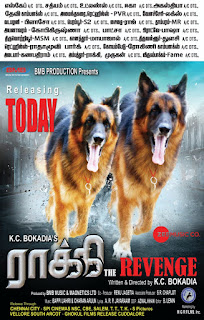 by Rinku Gupta Rocky   The Revenge directed by KC Bokadia, centres around the loyalty of a dog named Rocky,  to his master, a cop, played by Srikant. When his owner is murdered by 2 corrupt collegues in cahoots with an MLA and his goons, Rocky witnesses the crime. He is heartbroken but is determined to take revenge. How he does so is the story. The dog Rocky and his brother in the film have been well trained and directed to  convey the feelings of sadness and determination to avenge the master. The scenes where the two dogs work together to help Rocky seek vengeance has been well executed. The dogs who are at the centre of the story are made to execute thier parts in a manner that keeps up the interest. The various vast locations add a sense of space and make the chase scenes interesting. For Srikant  the role is a cakewalk and Eshanya as his wife does a credible job. Nasser as the top cop is well cast though there is not much for him to do. The flip side is that there is
Read more
More posts