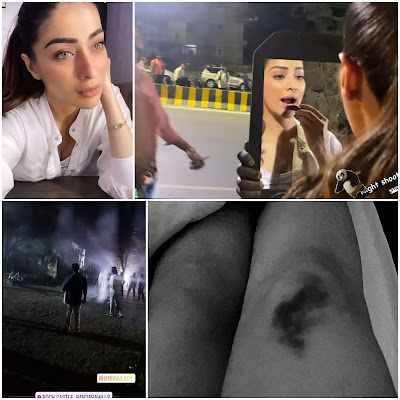 By Rinku Gupta Actor Raai Laxmi has been busy over the past few days,  shooting for a Telugu film in Hyderabad. In the wee hours of this morning,  around 2 AM, she was called in for her shot,  at the Rock Castle in Banjara Hills at Hyderabad. Raai Laxmi revealed on an Insta post that she was headed to the shooting spot, after waiting for her call. Accompanied by security personnel whom she thanked in her post, for keeping unit  members safe on location shoots, she also revealed that her next shot was an action sequence. But looks like the actor has been injured during the shoot! In her latest Insta post she revealed her bloodied knees which she seems to have scraped  badly and wrote, " Then this happened.  My return gift from an action shoot." She added however, " No Pain, No Gain" , calling herself, '#QueenOfInjuries'. We wish the brave and beautiful actor who seems to be making light of her injuries, a quick recovery !
Read more
More posts