- August 25, 2019
by Rinku Gupta Inspired by the popular Angry Birds games, the story takes you to Bird Island where the angry bird Red is reeling under self -doubt,  despite having saved his island from the Pigs earlier. But his personal crisis is cut short by a bigger one. Eagles are planning to destroy all pigs and birds and the duo have to unite to fight the Common enemy. Red has to also learn to work as a team and give credit to others when they deserve it. These and other lessons about love and relationships learnt amidst a great adventure in the face of danger. Do  Red and his new team succeed in saving thier homes? Action, adventure, romance and comedy,  the animation film packs in something for everyone in  just the right measure. Go for it!
Read more 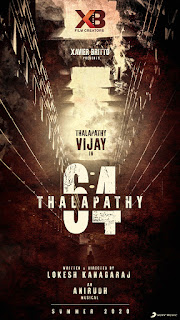 By Rinku Gupta The excitement is high with fans as news of Thalapathy64 has created a buzz all over. The film ia being produced by Vijay's relative, Xavier Britto of XB Film Creators.  The film is slated for an April 2020 release and is going to be a mass commercial entertainer directed by Lokesh Kangaraj. The producer issued a press release with details of the crew as follows : 'I am extremely glad and elated to announce the association with Thalapathy Vijay after a long period. Previously, I had the opportunity to produce three movies (Sendhoorapandi, Rasigan, Deva) of Thalapathy Vijay and I am very proud to inform you all officially, #ThaIapathy64 (tentative title) will kick-start soon, under our banner — XB Film Creators. The promising young talent, Lokesh Kanagaraj, director of Maanagaram and Kaithi will direct #Thalapathy64. We are excited to bring back the tremendous combination of Thalapathy Vijay and Rockstar Anirudh, to repeat the blockbuster success of Kath
Read more
More posts