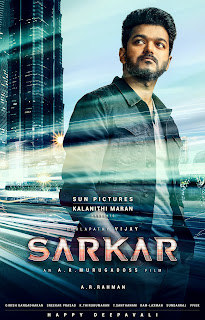 by Rinku Gupta The shoot of AR Murgadoss'  Sarkar is going on at a steady pace at the outskirts of Chennai at a popular shooting spot. The first look posters of this film were released recently, causing much excitement amongst fans. Now the latest entrant to the cast of this film is veteran actor Tulasi of Richie  and Pannaiyarum Padminiyum fame. The actor is happy  about her role, the details of which she cannot reveal right now she says. She says, "AR Murgadoss saw my work in my films Aadhalal Kadhal Seiveer and Pannaiyarum Padminiyum and thought  I would suit this role completely. Its wonderful to work with a director like him." Talking about Vijay she says, "I have always loved watching Vijay's films. In fact my son and I would  both make it a point to watch his films together. So when I got a call to be a part of Sarkar, it was wonderful! I have always had the highest regard and affection for him, like as if he were a family member! So wo
Read more
More posts