Santhanam's next directed by R Kannan

- May 02, 2019
Masala Pix in association with  MRKP Productions will jointly produce Santhanam’s new film directed by R Kannan Following the grand success of Dhillukku Dhuddu 2, Santhanam is now teaming up with director R.Kannan for a new film. Produced  by R. Kannan for Masala Pix in association with MK Ram Prasad for MKRP Productions, the film will be a wholesome entertainer laced with fun and action. Talks are going with leading actors and technicians to be part of this film and a top league actress will be playing the female lead. The shooting of this film will start from July and will hit screens in December 2019. Apart from writing  and directing  the film, R Kannan is producing the film for Masala Pix.
Read more 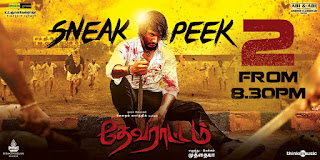 By Rinku Gupta Devarattam produced by Studio Green and directed by Muthaiya, stars Gautham Karthik opposite Manjima Mohan with Vela Prabhakar, Vinodini, Soori, Bose Venkat ,Fefsi Vijayan and others.  Set in Madurai the story revolves around a young lawyer Vetri ( Gautham Karthik)  who is the youngest brother amongst 6 sisters. The joint family lost their father to a local dada Ganesan ( fefsi Vijayan) who   is prone to eliminating anyone who dares to disobey his wishes. Vetri is a do- gooder who  believes that justice must prevail even if violence is needed as a means to do so. As luck would have it, when Vetri comes crosses the path  of Ganesan's son who is protecting a kidnapper, and kills both, all hell breaks lose. Ganesan vows revenge. Will Vetri be able to protect himself and his family?  Gautham Karthik has given his best to the action sequences which are the mainstay  of  this violent film. His hard work shows all through. Even the rigorous dance scenes showcase hi
Read more
More posts