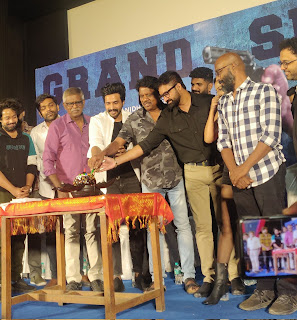 Actor Vishnu Vishal has played the lead role and produced the film ‘FIR’ for his production house Vishnu Vishal Studioz. The movie was released on February 11 by Red Giant Movies, and has witnessed a grand success. This is the next big success for Vishnu Vishal after Ratchasan. Marking the victorious stroke, the entire cast and crew of this movie celebrated the success meet thanking the press and media channels. Red Giant Movies M.Shenbagamoorthy honoured producer Vishnu Vishal by offering him a gift as the token of congratulating the success. Amaan said, “I thank director Manu, Vishnu Vishal and others for giving a chance to be a part of this movie. I am so glad that audiences have liked this movie, and have shared their love through the great support.”   Praveen Kumar said, “It’s so great to see that audiences have welcomed this film and have celebrated it wholeheartedly. I thank producer-actor Vishnu Vishal and director Manu for making me a part of this project.” Abhishek said, “T
Read more
More posts