Vijay's Thalapathy 65, to be directed by Nelson for Sun Pictures! 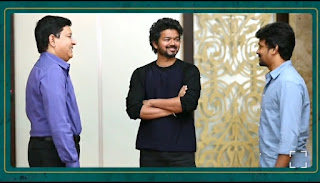 by Rinku Gupta The big announcement on Thalapathy 65 is out! An official confirmation has been made on the project.  Thalapathy Vjiay will team up with director Nelson Dilipkumar for the project which will be bankrolled by biggie Sun Pictures. Anirudh Ravichander will compose the music,  his third flick with Vijay, after Kaththi and Master. Nelson who debuted with Nayanthara's Kolamavu Kokila is currently working with Sivakarthikeyan in Doctor. Both Sun Pictures and Nelson officially announced the project on social media. This is Sun's 4th film with Vijay after  Vettaikaaran, Sura and Sarkar. Producer Kalanidhi Maran with Vijay and Nelson Several directors names had been doing the rounds but Nelson's name  has now been officially confirmed. The video released by the team with fast cars and guns indicates that the film will be an action entertainer. There is a lot of excitement on the news on social media.   Wishes are pouring in from the film industry as well as fans. Vij
Read more
More posts