Showing posts from December 8, 2018
Show All 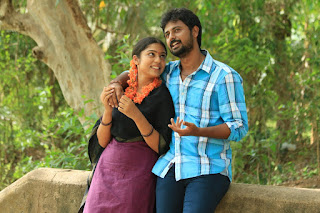 The story of Seemathurai revolves around  a college student Maruthu ( Geethan) and his mother (Viji) a fish seller in a village. While the single mother toils hard at work, her son though a college student, keeps loitering with his friends, doing nothing all day. That is till he sets his eyes on Poorani ( the talented Varsha Bollamma)  in a  bus going to college. He is besotted at once and after that spends his time following her around, much to her discomfiture. One day he proposes his love for her, which she refuses since she wants to study. But that doesn’t deter him at  all. Even when her father finds out and goons are sent to beat him  and warn him to stay away from her, he continues steadfastly in his aim, forcing her to accept his love, in the midst of all the beatings on the road. Meanwhile, the heroine’s thai maman (maternal uncle) who had asked for her hand in marriage  is at first cut up when her father refuses and throws him out of the house. But later he  seems
Read more
More posts