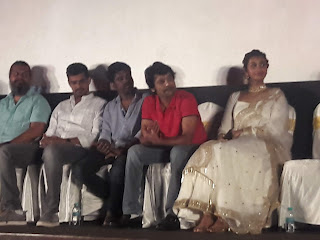 by Rinku Gupta The audio launch of Potential Studios' Monster took place today. The film stars SJ Suryah and Priya Bhavani Shankar along with Karunakaran. The film is directed by Nelson Venkatesan with music by Justin Prabhakaran.  The DOP is Gokul Benoy. The family entertainer revolves around the unique story of a man dealing with a rat menace at home and is touted to be a complete family entertainer. A real rat was also part of the shoot. 'Shooting with the rat was quite tough as we had to wait for its reactions and even the editing was tough,'said editor VJ Sabu Joseph.   'This is my second film with Nelson and Sabu. So its very special to us. Our interaction was much easier due to that,'said Justin Prabhakaran. 'Director Nelson was very particular about what he wanted and would not stop till he got the correct reactions,' said heroine Priya Bhavani Shankar. Director  Nelson said ,' The hero is SJ Suryah and the villain is a rat is what I h
Read more
More posts