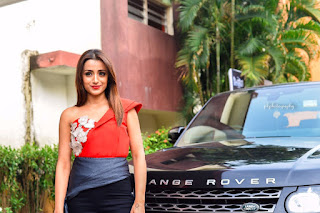 by Rinku Gupta Actor Trisha looked every inch the diva she is at the press meet to mark her next release Mohini. Resplendant in a black and red ensemble, she sent the photographers into a tizzy with the unique photo op at the event. Interacting with the  media she seemed both excited and at ease at the release of her film this week. Produced by Prince Pictures the movie is releasing on July 27th and is directed by R Madhesh. A visibly excited Trisha said, "This is my first dual role. I play Vaishnavi and Mohini in the film which is a horror thriller. Around 85 percent of the film has been shot in London. Producer Lalshman has gone out of his way to give a good product." She added that the film had been accorded a U from censors and families could go and enjoy watching it. Trisha admitted that horror is a genre she enjoys watching herself.  “Mohini will not be a routine horror film, but with some scientific justifications involved” said director Madhesh  The
Read more
More posts