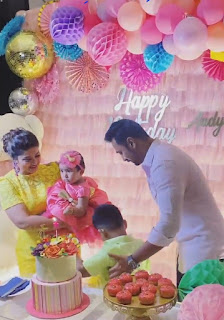 By Rinku Gupta Proud parents Prasanna and Sneha celebrated the first birthday of their second child, baby Aadhyantha yesterday. Their son Vihaan was also present,  enjoying the party with his baby sister and his friends.  The actor couple held a get together at their beach house near Chennai. The gathering was attended by close family and friends. Ace photographer Karthik Srinivasan and wife Hema, Swetha Shankar and actor Meena, and other close friends of the couple, were also present.  We wish the little baby girl a very happy birthday !
Read more 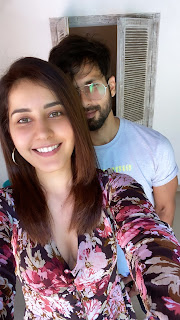 By Rinku Gupta Many Tollywood and Kollywood heroines have been debuting on  OTT platforms for some time now. From Kajal Aggarwal and Tamannaah to Anjali, Vani Bhojan , Sai Pallavi, Kalyani Priyadarshan , Akshara, Shruti Hassan, Priyamani, Simran, Ramya Krishnan, and Samamtha, the list goes on. Now the latest to join this list is  Raashi Khanna .                Raashi poses with Shahid Kapoor   The talented beauty  will start shooting for a thriller directed by The Family Man fame director duo, Raj and DK for Amazon Prime. Incidentally, the  duo had succeeded in roping in Samantha Akkineni for her digital debut in the Amazon Prime Family Man 2 , which will air soon. Raashi is cast opposite Kabir Singh hero, Shahid Kapoor. She posted a pic of herself with her co- star and a tongue-in- cheek comment, indirectly confirming her presence in the series. Shahid too had welcomed her on board in a post. Shahid had been busy shooting for the Tollywood Jersey remake in Hindi. Now,  the shoot wit
Read more
More posts