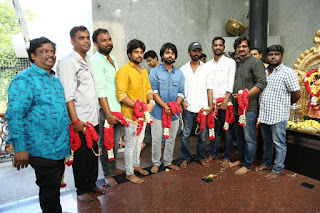 By Rinku Gupta  Producer S N Rajarajan of K Productions joins hands with hero GV Prakash Kumar for his upcoming film in which the latter  plays a student. Director Mathimaran Pugazhendhi who earlier worked as an assitant director to Vetri Maran makes his debut with this film. Varsha Bollamma  who has done Seema Thurai, 96 and the upcoming Vijay  movie Bigil now pairs up with GV Prakash. Vaagai Chandrasekar, and debutant actor Guna play important roles in the film.  GV Prakash scores the music,Vishnu Rangasamy handles the camera while Ilayaraja handles the editing portions.  The  story revolves around how a student  faces the difficulties that appear outside the college. This is touted to be a commercial action film that includes love and emotions. The entire team had a pooja ceremony helmed at AVM Studio today. The pooja ceremony saw producer Kalaippuli S Thanu, Directors Vetri Maran, Samuthirakani, Subramaniya Siva, Sarvanan and Ilan as chief guests at the event.
Read more

Keerthy Suresh begins shoot for next in Kodaikanal 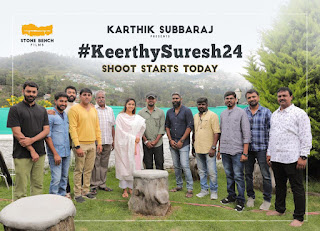 by Rinku Gupta Production No.3,  starring National Award winner Keerthy Suresh, has gone to the floors. Written and directed by debutant  filmmaker Eashvar Karthic, the film has begun today in Kodaikanal. The film is presented by ace filmmaker Karthik Subbaraj's Stonebench Films  and produced by Kaarthekeyen Santhanam. The songs and background score of the film are set to be composed by Santhosh Narayanan. The film is co-produced by Kal Raman, S.Somasegar and Kalyan Subramanian. The film boasts of a talented team of technicians, with cinematography by Kharthik Palani, editing by Anil Krish, art direction by Sakthee Venkatraj M, costume design by Pallavi Singh and sound design by Thomas Kurian. The shooting is set to proceed at a rapid pace and the film will be ready to hit the screens early next year. This is the heroine's 24th film .
Read more
More posts