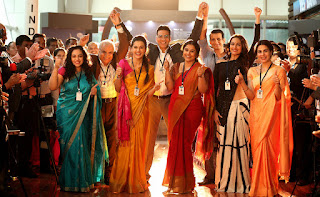 Akshay Kumar, Fox Star Studios’ and Hope Productions' Mission Mangal ( Hindi, with dubbing in Tamil and Telugu) is racing towards a bumper advance booking from audiences across India. The advance bookings, for India’s first space film, has received an overwhelming response across theatres in India. It is all set to surpass expectations as advance reflects the movie-goers excitement to witness the mission to Mars and the response from theatre/ plexes has been phenomenal. Mr. Kamal Gianchandani CEO, PVR Pictures and Chief Business Planning and Strategy, says, “Mission Mangal has received a staggering response from the audience and it affirms the belief that a good content film well marketed and promoted will definitely pull the viewers to the theatres. Akshay Kumar and Fox Star and Hope Productions have done a great job. Akshay Kumar has mastered the genre of presenting real-life stories with a touch of entertainment. Mission Mangal only surpasses that standard and it has h
Read more
More posts