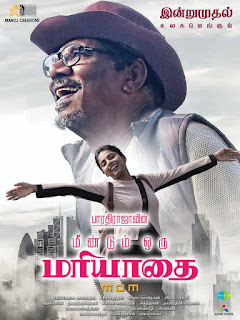 By Rinku Gupta Menndum Oru Mariyathai or Old Man ( OM ) directed by Bharathi Rajaa,  is set in the UK. A grandfather Palpandi ( Bharathi Raja) is put into an old age home by his son but he disappears from there. He lands up on the streets of London, determined not to go back to his greedy son who had brought him back from India, after selling his farmlands without informing him.  Unused to the local culture, his wife ( Mounica) had died due to trauma after being jailed over an issue related to her grand-son and the child rights officers. In such a scenario, Old Man ( as the heroine calls him) decides to stand on his own feet. One day he comes across a young girl , Venba ( Raasi Natchatra , pretty and talented) whom he saves from committing suicide. She is disillusioned about life due to a lecherous brother-in- law ( Fenon Rodriguez) who forces her to dance in clubs. Old Man decides to convince her about the beauty of life so as to make her want to live and thus issues a 10
Read more

- February 22, 2020
By Rinku Gupta Godfather, is a thrilling story about a helpless dad Adhiyamaan ( Natty) who has to fight a don Maruthasingam ( Lal) in order to save the life of his little son Arjun( Aswath). The lion and deer trope is instilled right from the beginning when the credit titles role. When a cruel don finds out that his little son needs a heart transplant to survive, he starts a hunt to find a child he can kill and use the heart for his son. His goons land up in the apartment building of Adhiyamaan and wife Mithra ( Pretty and talented Ananya who fits the bill). The hunt now begins and the family who gets to know of the don's plan, must now somehow survive and foil the don's plans. How far will a dad go to save his son's life? Which dad will win? The director, Jegan Rajsekhar has done a good job of keeping the tension levels high. The screenplay moves steadily forward, leading to a surprise climax. Natty as the helpless dad bites into his role with full gusto. He has
Read more 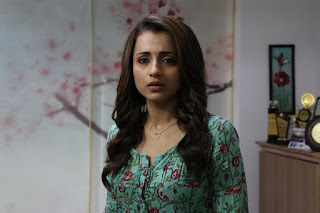 By Rinku Gupta Paramapatham Vilayattu , Trisha's 60th film is releasing on 28th february. Produced by 24 Hours Productions, the film has music by Ambareesh and is directed by K Thirugnanam. The pre-release function was attended by Bhagyaraj, T Siva, TV actor Sangeetha (who plays Trisha's friend, cameraman J Dinesh ( who assisted RD Rajasekhar), Ambareesh ( who revealed this is his 8th film) , producer K Rajan, baby Manasvi and actor Vijay Varma amongst others. Everyone was surprised by Trisha's absence at the event. Producer Suresh Kamatchi said, " Im happy at the way Thirugnanam has done this film. But   Im concerned about why some actors don't come to their own film events for promotions. Its because they have a large fan following that we sign them up and when they come to functions it helps promote the film." He was referring to the absence of Trisha for the film event. Producer T Siva also expressed his displeasure about Trisha
Read more
More posts