Vaibhav begins next film with a pooja 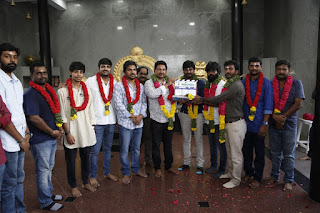 press note: Vaibhav teams up with debut filmmaker Chachi for a Rom-Com An innocuous face and look owns a luxurious advantage for it becomes a great asset for an actor as it stands out to be an endowment to impress universal audiences. Obviously, it’s a commonality factor that would befittingly look perfect for any genre. Significantly, actor Vaibhav has found himself lucky to have been gifted with such traits. Be it a supernatural thriller, horror-comedy, Rom-Com or anything, he instantly becomes the cynosure. We hear the same from debut filmmaker Chachi whose having him onboard for his film produced by Dinesh Kannan and Sridhar for Wallmate Entertainment. “Yes, the first and foremost thing that the script demanded was the innocence embellished protagonist, which I found so much prevalent in myriad with Vaibhav. Just look into his movies till the date and every film will stand out to be a perfect justification,” says filmmaker Chachi, who had been associated to writer-Di
Read more

Sandakozhi 2 to release in 2000 prints worlwide in Tamil- Telugu 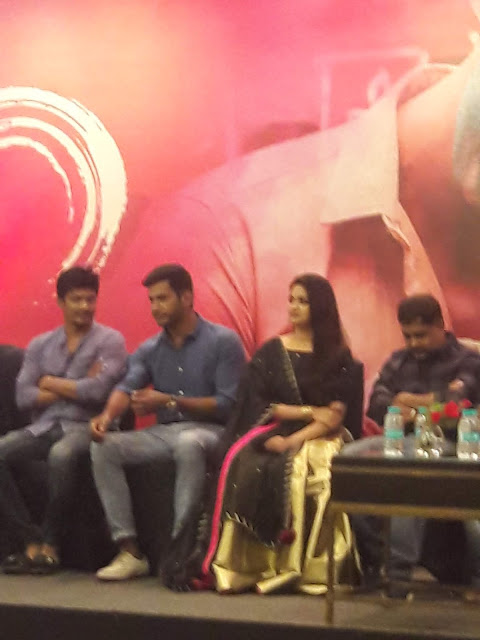 by Rinku Gupta The grand press meet of Sandakozhi 2 was held today at the grand Leela hotel. The cast and crew including Vishal, Keerthy Suresh and Lingusamy were present. " It doesnt seem like 13years have passed since the original. It seems like 13 days. But after 25 films I can see the difference in Vishal's performance. A particular few scenes will show how fine tuned his performance has become,"said Lingusamy. Keerthy Suresh was happy to have worked in this film.  " It helped me relax during the strenuous shoot of Mahanati". Speaking on the occasion Vishal said, " Sandakozhi helped to establish me as an action hero thanks to Lingusamy sir. The sequel too will be an important film for me.  It will release on October 18th in Tamil and Telugu. Around 2000 prints worldwide  are planned to be released." About Keerthy he said, " Im so happy to have worked with her. I got tremendous respect for her after seeing Mahanati. I'm
Read more

- September 24, 2018
press note: Karthi's Dev shooting was cancelled in Himachal Pradesh in the Kulu Manali area due to big landslides and flash floods. 140 crew members were left stranded with a 1.5 crore loss to producer Lakshman. The entire team of Karthi-Rakul Preet Singh starrer DEV is stranded at the Kulu Manali due to relentless heavy landslides and flash floods. It turned out to be a bizarre scenario from last night, where the rain falls increased terribly leaving the people across the state of Himachal Pradesh in complete hazard. While actor Karthi was supposed to join the shooting of DEV yesterday, the entire team involving 140-crewmember had already started working there for past four days. Marooned by the reckless National disastrous situation, actor Karthi shares the news from Kulu Manali saying, “We actually had to shoot particular scenes in the ambience of rainfalls or snowfalls. Apparently, things were perfect with gentle rains and even the weather forecast didn’t have an al
Read more
More posts