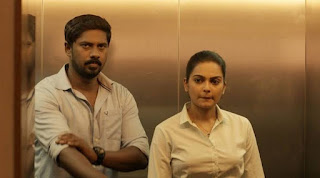 By Rinku Gupta  V 1  is the title of Paradign Pictures- Kolorful Beta Movement Productions' film directed by Pavel Navageethan , former assistant director to Vetrimaaran. The film is a whodunnit mystery about the murder of young girl.  Forensic officer Agni ( well cast newbie Ram Arun Castro) handles the case in association with his good friend amongst colleagues,  Luna ( Vishnupriya Pillai, who acts well and perfectly  suits the part of the business- like cop). The duo come across several clues including red herrings as they go about trying to use investigative methods and tools involving forensics and psychology to solve the case. Who is the culprit and how do they crack the case is the story. The cast includes Mime Gopi, Linga and Lijeesh. The film is a good attempt at trying to showcase the importance of forensics and psychological investigative tools, far removed from the usual kind of  suspense thrillers we see in Tamil cinema. The suspense mounts as the duo run throug
Read more
More posts