Showing posts from September 4, 2019
Show All 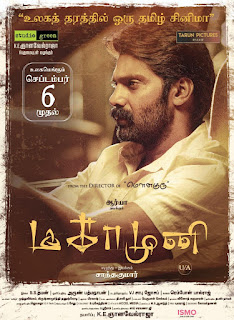 By Rinku Gupta Magamuni is the second film of Mounaguru director Shanthakumar, after an 8 year gap. Produced by Studio Green, it stars Arya , Indhuja and Mahima Nambiar in the lead. Briefly put, Arya plays a hit man ( Maga) with a wife Viji ( Indhuja) and a kid. He lives life on the edge, working for a politico ( Ilavarsan). Things go over board one fine day when he finds himself on the run, the very people he trusts, betraying him. Does he survive? On the other end is the naive Muni ( Arya) , who unwittingly gets embroiled in a caste war when a journalism student ( Mahima Nambiar) shows an interest in his naive yet intelligent personality. With her father out to get him, does he manage to survive ? More importantly, what is the connection between these two characters? How thier destinies connect and impact thier lives is the story. Director Shanthakumar gives you an edge of the seat experience, with a taut sceenplay, where tension seems to be building up r
Read more
More posts