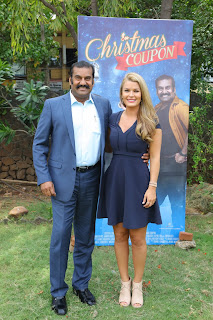 By Rinku Gupta Veteran actor Napoleon is now acting in a Hollywood movie called Christmas Coupon. The actor and his team flew down to Chennai to hold a press meet about the movie. Directed by Daniel Knudsen, it has Courtney Mathews and Aaron Noble in the lead. In this romantic story, Mathews plays a skating champ who is teaching skating to children. Noble is a hockey player. Napoleon plays a sports agent.  Speaking about his experience there,  Napoleon narrated how recording in live synch sound left no room for corrections in a dubbing studio like in Kollywood. The actor hoped to play the lead in a Hollywood movie someday. ' 'Last year we released the trailer of Devil's  Night a crime thriller which will release soon. Christmas Coupon too has been shot in Detroit. I had to act in extreme cold conditions and that was very tough since I am not used to such cold,' said Napoleon. The actor was accompanied by producer Tel K Ganesan and co actor Sheena Monnin f
Read more

Bow Bow, a film for the child within us 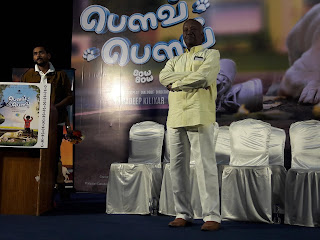 by Rinku Gupta London Talkies' K Natarajan Bow Bow is directed by S Pradeep Kilikar. The film is inspired by true events and has won several International awards including award for Best  International  Youth Actor for Child hero master Ahaan . The rest of the cast includes V Shiva, Tejaswy, Sathyan, Sharmila, Nanjil V Rambabu, Jane and Pulikutty. The audio launch of the film was held amidst the cast and crew. The DOP is K Arunprasath with music by Marc D Muse and A Denis Vallaban. The movie centres around a child and a dog and 2 dog trainers K9 Baskar and Varamani have trained the dog. The dignitaries from the film industry included Abirami Ramanathan, Chitra Laxman, director Sasi, H Murali, PL Thenappan, actor Ashok and editor Mohan. The story is about the relationship between a child and his dog. It was no easy task adjusting to the moods of  child actor and the dog and the unit did a good job of it. " This is a film not just for children but also for the child within
Read more
More posts