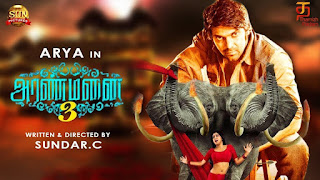 By Rinku Gupta   The first two parts of the 'Aranmanai' series, were a huge success. Now, director  Sundar C is well on the way to completing the shoot of his hit franchise, with Aranmanai 3. Recently the shoot moved to Pollachi for the final schedule where the entire cast including Arya and Raashi Khanna were present. There is a buzz around the  climax fight scene which took place in a huge set for the film .  For this film, a majestic and huge palace set was made by art director Gururaj, at a cost of 2 crore at the EVP Film City, Chenna which  features a grand  fight sequence. This climactic fight scene for which Stunt Director Peter Hein co-ordinated with Sundar C, was filmed there for 11 days.  So far,  Sundar C's film Action, with Vishal and Tamannaah , had hi octane stunts. It is being said that the stunts in Aranmanai 3 are going to create as huge a buzz as Action did.   The movie stars Arya, Rakshi Khanna, Sundar C, Sampath, Madhusudhanan Rao and many more.    Film
Read more
More posts