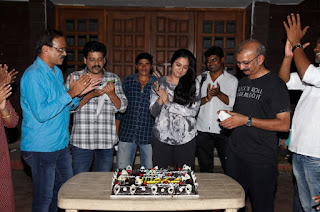 Press Note: Jyotika, the protagonist of the Tamil film Kaatrin Mozhi completed the film in a start to finish single schedule. The film commenced shooting on 4 th June and went on without a break and she completed her portions on July 25, 2018. The film is a remake of the super hit Tumhari Sulu in Hindi, which starred National Award winning actress Vidya Balan. Writer-Director Radhamohan, with whom Jyotika gave a super hit Mozhi a decade ago,  has tweaked the story a bit to suit South Indian sensibilities.The film is a romantic comedy starring Jyotika, Vidhaarth, Lakshmi Manchu, Kumaravel, M.S.Bhaskar, Manobala, Uma Padmanabhan, Mohan Raman and many others. On the occasion of the last day of the shoot with the team, Jyotika surprised everyone by gifting from her side a silk saree and silk  veshti and shirt to all the crew members and took photos with them. She also presented a special gift to all assistant directors for their fantastic work. The entire crew was delighted with
Read more
More posts