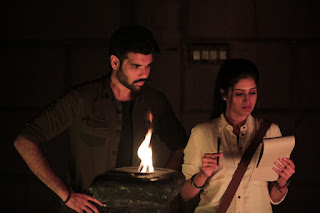 Double Meaning Production Arun Mozhi Manickam, who has been churning out content-driven movies, is all set to endow movie buffs with yet another appealing flick titled ‘Maayon’.  Following the film's teaser premiere, it has sparked a lot of interest due to its intriguing mythological theme, which has been followed by the release of two mesmerizing tunes that have already received a good response and have raised expectations. The Maayon's "U" rating is in stark contrast to the production’s previous box-office triumph, "Psycho," which was rated "A." The team expressed their gratitude to the CBFC for its no-cuts certification, which is unusual nowadays. Furthermore, Maayon became the first-ever Indian movie teaser to have an ‘Audio Description’, to offer a wholesome movie-watching experience to the visually challenged individuals. The team is now engaged in the audio-described version of the full film to hit the big screens for the visually challeng
Read more
More posts