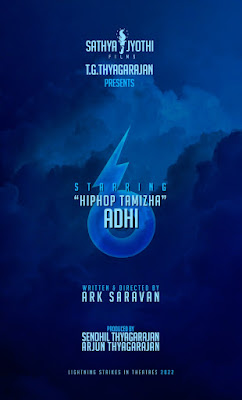 Following “Anbariv” which is scheduled for release shortly, Sathya Jyothi Films and Hiphop Adhi are collaborating on a new project. The untitled flick is a big budget fantasy entertainer directed by ARK Saravanan of (the Aadhi Pinisetty starrer) Maragadha Nanayam fame and is produced by Sendhil Thyagarajan, Arjun Thyagarajan and is presented by T.G. Thyagarajan of Sathya Jyothi Films.  The project was successfully signed on the auspicious occasion of Aayutha Pooja, and the shoot will commence by December 2021. The entire movie will be shot in a single-stretch schedule across Pollachi and Chennai in a span of 75 days. The talks are going on with top league actors and technicians including a famous heroine to play the female lead character. Currently, the post-production work of Anbarivu directed by Aswin Raam is nearing completion. The official announcement about the release date will be made soon. This movie is a family entertainer featuring Hiphop Adhi, Napoleon, and Kashmira Pardeshi
Read more