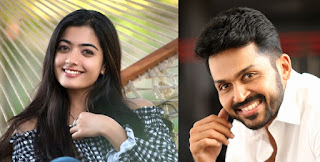 Actor Karthi has been under the spotlight for being a part of films that are based on different genres. While the actor is currently shooting for an untitled film directed by Maanagaram fame Lokesh Kanagaraj’s, he will soon start shooting for his new film. Tentatively titled as K19, the film produced by SR Prakash Babu and SR Prabhu of Dream Warrior Pictures. The film will have the ingredients of emotions, action and comedy blended together, which will cater to the tastes of universal audiences from kids to elders. The process of erecting grand set works for this film is happening on full swing in Chennai. Apart from Tamil Nadu, the team has planned to have the shooting in Hyderabad as well. Dream Warrior Pictures assures that the film will be loved by family audiences just as they well received his entertaining movies like Siruthai and Kadaikutty Singam. The film is directed by Bhagyaraj Kannan, who had earlier shot to fame for his entertaining Rom-Com titled ‘Remo’.  Actres
Read more
More posts