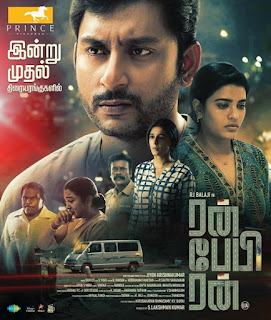 The Prince Pictures' RJ Balaji , Aishwarya Rajesh starrer Run Baby Run, hit theatres on Feb 3rd. Rj Balaji tries a more serious role than his previous outings on screen. He plays a bank officer who inadvertantly gets involved in a murder of a medical student ( Aishwarya Rajesh in a cameo). When he tries to get to the bottom of the myterious killing he comes across a shocking truth. What is the reality behind the series of  innocent deaths?  The thriller gets right to the heart of the story from the word go, avoiding any kind of cinematic distraction which works in its favour. The happenings in the first half are quite gripping, with both Aishwarya and Balaji putting thier best foot forward in thier performances. Balaji has moved into a new territory with a role that has hardly any dialogues. He rises to the occasion, despite few moments when he could have thrown in a little more emotions and expressions. But overall the writing supports his performance. The music by Sam CS is a bi
Read more 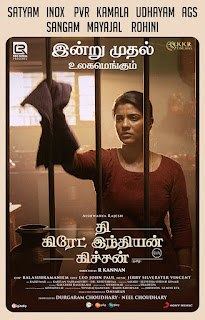 The Great Indian Kitchen Tamil remake of the original is directed by R Kannan and hit theatres on feb 3rd. Aishwarya Rajesh plays a newly wed homemaker settling into her husband's (Rahul Ravindranath) home.  When her mother- in- law leaves town on a long trip, soon she discovers that her  husband and father -in-law seem to be displaying chauvinistic tendencies, which bind her firmly to the kitchen,  cooking a variety of meals to suit their tastes, with little regard for her as an individual.  Instances keep piling up till one day the dam of her patience bursts. Does the marriage survive? Aishwarya Rajesh gets into the skin of the new, docile, hardworking wife, aiming to please till matters come to a head. Every nuance of her emotions is intricately portrayed. Rahul on the other hand seems miscast,  restricted with his expressions, body language and voice modulation and doesnt do justice to the role as much as  Suraj in the original. The film seeks to bring out how patriarchy and c
Read more 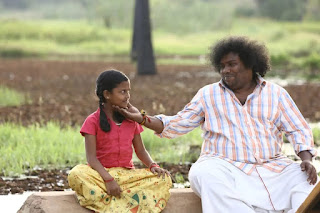 Pa Ranjith 's Neelam Productions' Bommai Nayagi is director Shan's debut film which hit screens on feb 3rd, starring Yogi Babu. Yogi Babu plays the affectionate father of a little girl  named Bommai Nayagi (Srimathi) and works at a tea stall. Though life is tough, he manages to pull along, till one day tragedy strikes. His 9 year old daughter is molested by 2 grown up drunkards. The distraught dad takes the help of his step brother ( Arul Doss) a devious politico who only shields the perpetrators. But help comes for the distraught parents in the form of an activist (Hari Krishna) who helps them get justice through the courts. Does the child overcome the trauma? Do the parents get justice? The story highlights the prevalent issue of child abuse and offers a ray of hope for the innocent and powerless, in the way the proceedings are shown and how the court case  is conducted. Some loopholes  the powerful take advantage of, which also take a toll on hapless victims, is equally
Read more 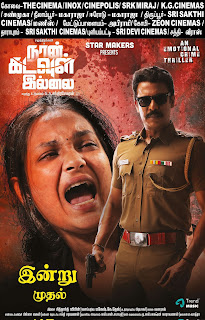 Director  SA Chandrasekar's Naan Kadavul Illai hits theatres today on Feb 3rd. Samuthirakani plays an upright CB CID division cop whose family comes into danger when a dangerous criminal Veerappan ( Saravanan) escapes jail and is out to seek revenge on him and anyone who was involved in convicting him.  He is aided by another cop ( Sakshi Agarwal).  In a parallel track is an old man who gets called Kadavul ( SAC) after he anonymously starts helping people.  What is the connection of all these characters? How do their paths intertwine? Does the  cop get to apprehend the blood thirsty criminal on time? Samuthirakani plays his part to perfection as the super cop and the family man.  The family scenes, are well captured with Ineya,well cast as his wife.  Sakshi plays  a cop who packs a mean punch and has done very well in the action scenes,  lending credibility to them. But the alluring attire she is in,  in such scenes makes you wonder if that was really necessary. SAC fits the part
Read more 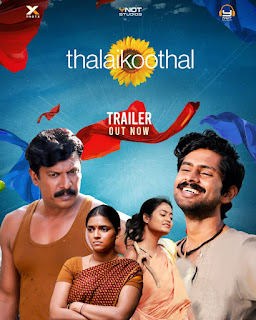 Director Jayaprakash Radhakrishnan's Ynot Studios' production Thalaikoothal starring Samuthirakani, Kathir and Vasundhara Kashyap hits theatres on Feb 3rd. Samuthirakani plays a middle aged man whose comatose father needs a lot of caregiving which puts a strain on his finances and ultimately ruptures his family life with his wife,  played by Vasundhara. The age old practice of euthanasia is rampant in the area, for old folks who are cannot be healed, but  the father-son bond is so strong that the loving son refuses to resort to it. What happens when his wife decides to leave him? The film is realistically shot and the actors have played their parts so well,  that the happenings, draw you in completely. The family equations between dad and son, dad and daughter , husband and wife and even the in-laws, are brought out with care and conviction, giving you a peek into their lives.  The backstory of a youthful romance of the old man ( played by Kathir) is presented with some great
Read more 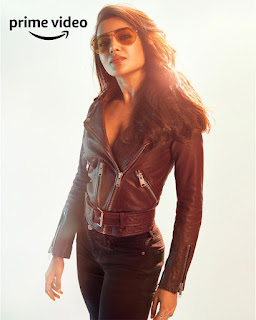 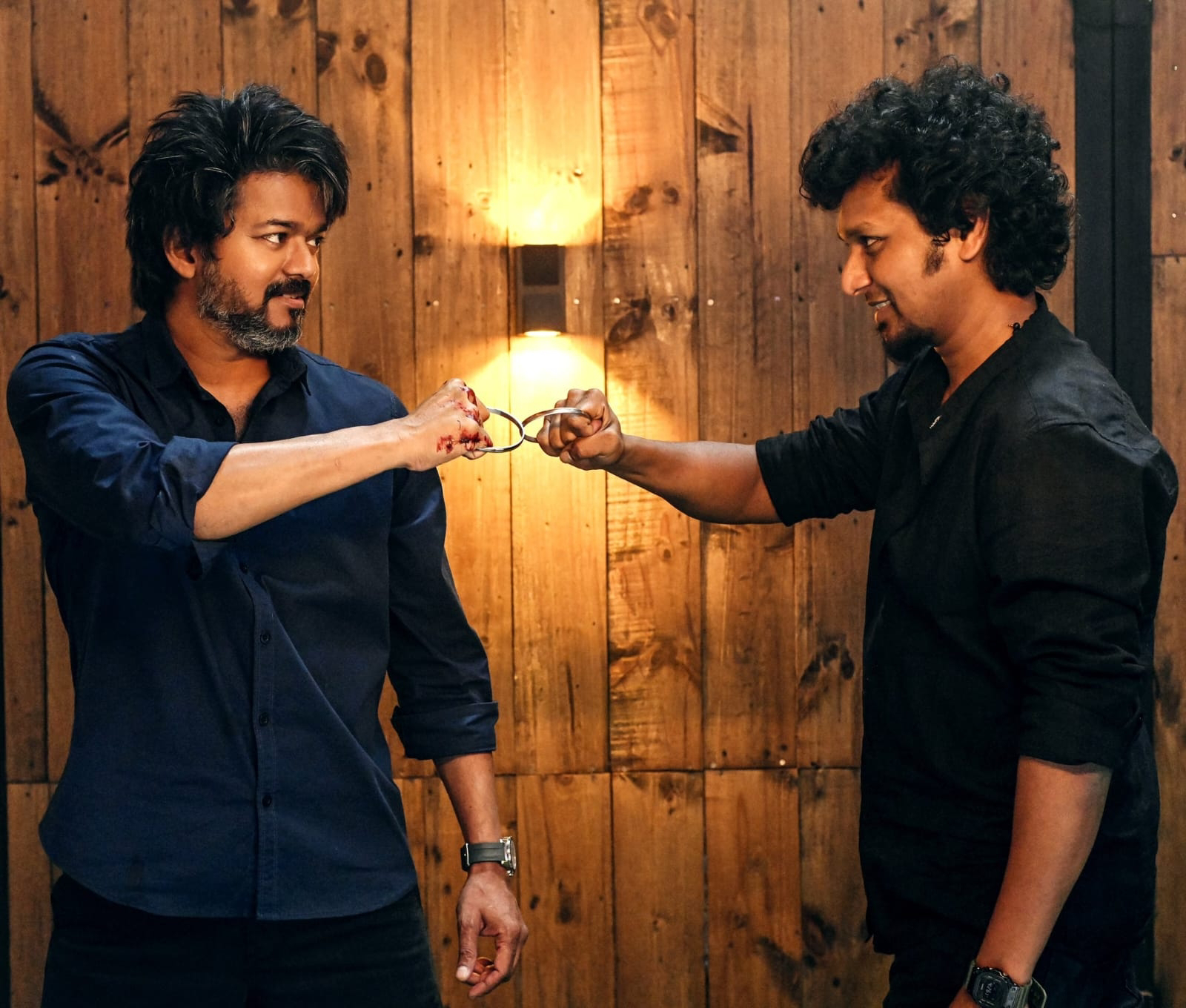 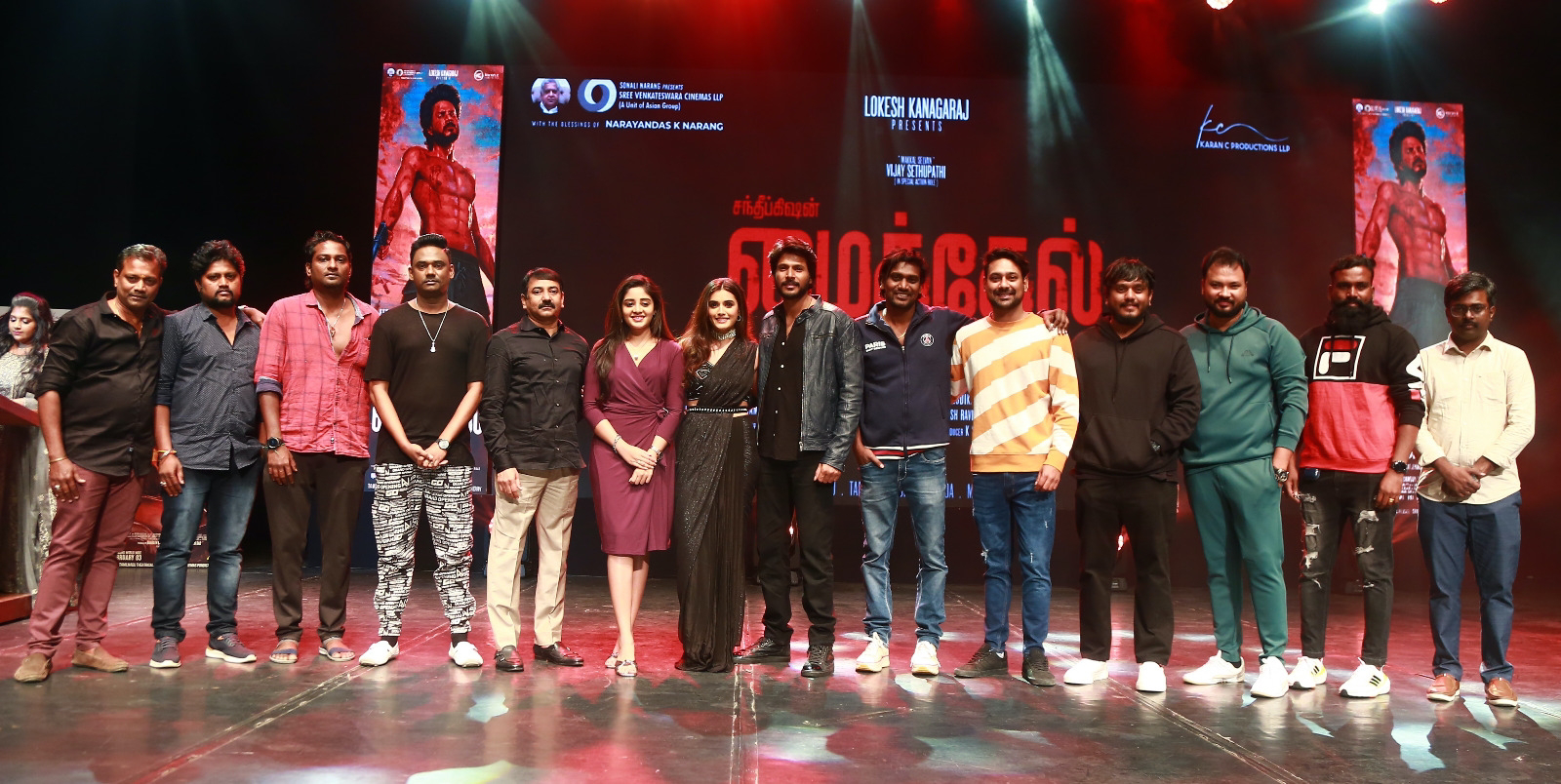 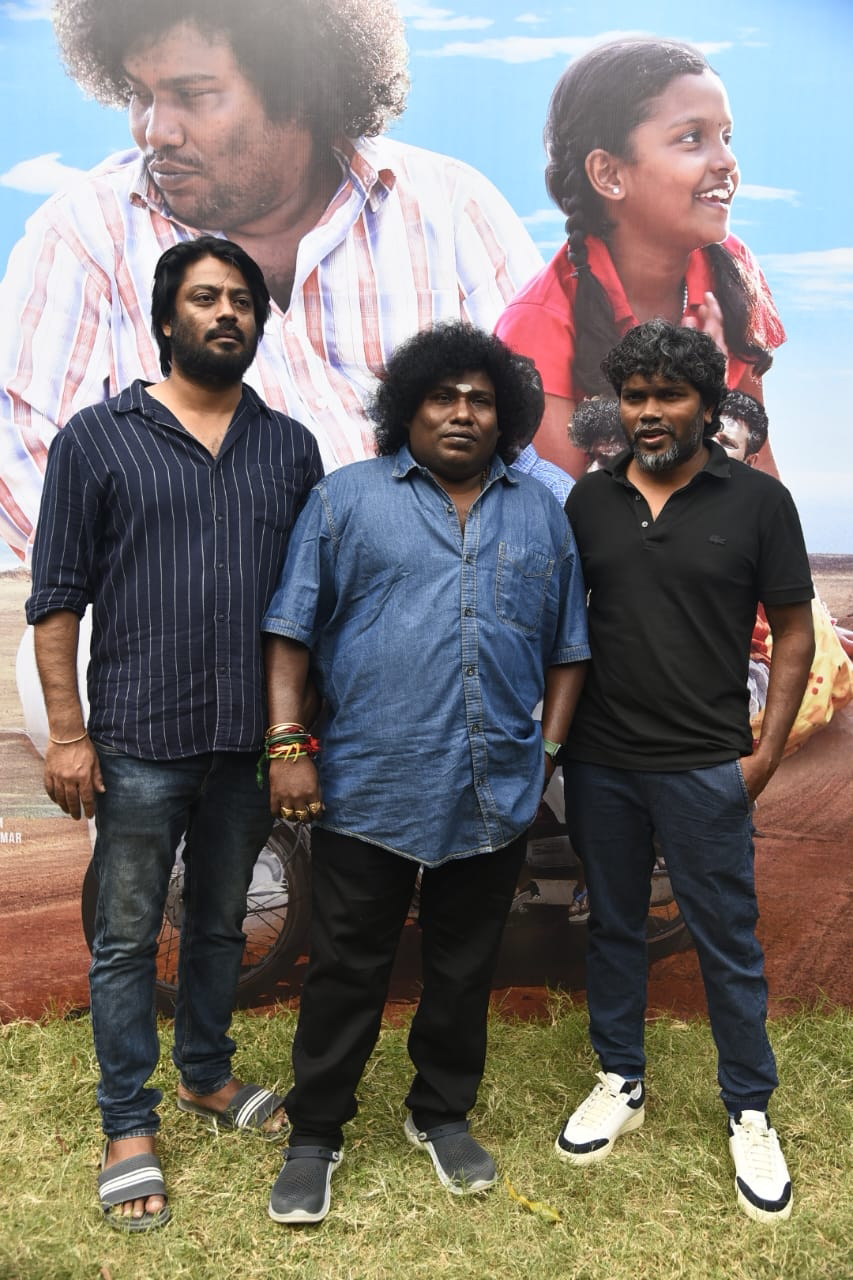 "The system of titling films in Tamil should be brought back into law”- Director Perarasu’s humble request to the CM of Tamil Nadu Thiru.MK Stalin at the trailer and audio launch of ‘Striker’

‘Striker’ is an upcoming Tamil film produced by Henry David and Justin Vijay under ASW Creations and JSJ Cinemas. SA Prabhu has directed the film. Justin Vijay, who is also one of the producers, debuts as a Hero with thias film. Vidya Pradeep plays the female lead. Robert Master, Kasthuri, Abhinaya Sri and others have played pivotal roles. Vijay Siddharth has composed the music and the background score has been composed by VT Bharathi and VT Monish. Cinematography has been handled by Manish Murthy and editing by Nagooran Ramachandran. The music and trailer launch of the film was held yesterday in Chennai. Directors Suseendhiran, Perarasu, Sakthi Film Factory Sakthivelan, Actor Imman Annachi, Bharatmata Manimaran, Actor RS Karthik, Vijay TV fame Naveen and many others graced the event as special guests.The system of titling films in Tamil should be brought back into law”- Director Perarasu’s humble request to the CM of Tamil Nadu Thiru.MK Stalin at the trailer and audio launch of ‘Strik
Read more 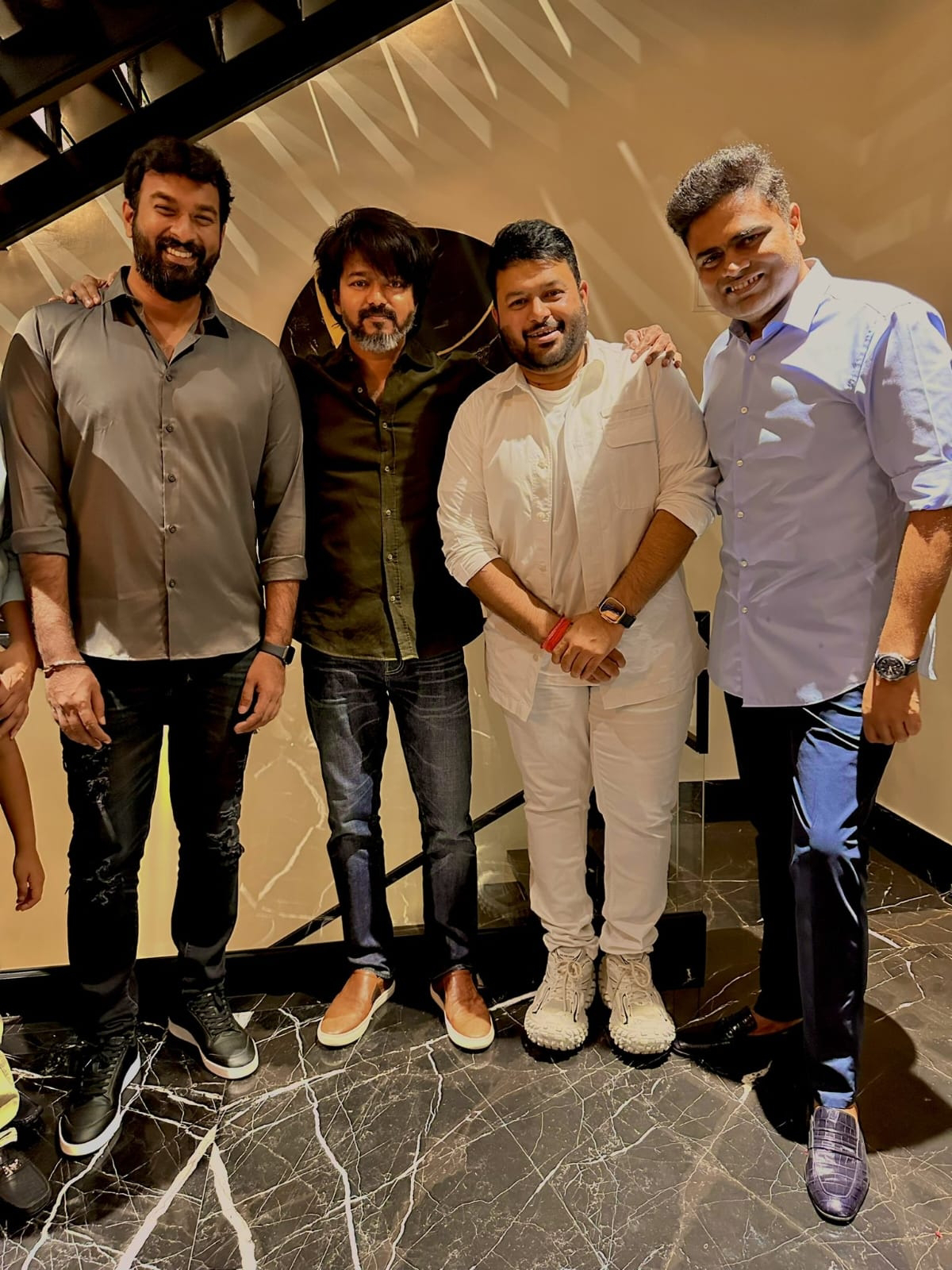 Sri Venkateswara Creations 'Varisu' starring Thalapathy Vijay that recently released as a Pongal treat, is now running successfully in theatres. Directed by Vamshi Paidipalli, and produced by Dil Raju and Shirish, the film opened up to positive response from the audience anad critics as well, not only in Tamil but also in Telugu. The film has an ensemble cast starring Rashmika Mandanna, R Sarathkumar, Prakash Raj, Prabhu, Jayasudha, Srikanth Meka, Shaam, Sangitha, Samyuktha Shanmugham, Yogi Babu and others. Thaman S composed the music for the film. 7 Screen Studios distributed the film. Even after 17 days in Hosur Lakshmi Devi theatre, ‘Varisu’ is running with housefull shows. The Pondicherry PVR theater is screening twice as many screens for ‘Vaarisu’ than any other film. So far Ulaganayagan Kamal Haasan’s ‘Vikram’ had the highest footfall in Trichy Mariam Theatre which has now been overtaken by Thalapathy Vijay’s ‘Vaarisu’ and is now being enjoyed by a larger audi
Read more 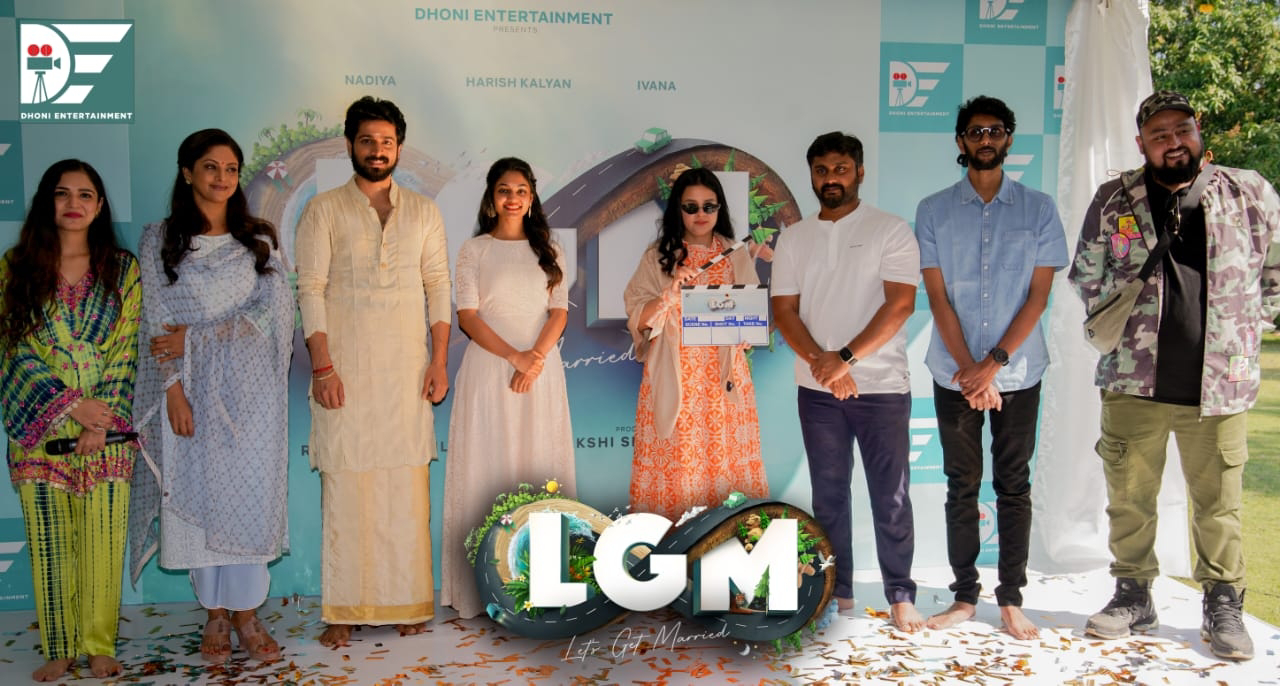 Chennai, January 27: The shooting of 'L.G.M', which is being produced by Sakshi and Mahendra Singh Dhoni’s production house Dhoni Entertainment, began here today with a grand puja ceremony that was attended by  a host of celebrities along with Sakshi.  'Lets Get Married” which is being directed by debut director Ramesh Thamilmani and which was conceptualized by Sakshi herself, features actors Harish Kalyan, Nadiya and Ivana in the lead and also features well known comedian Yogi Babu.  Director Ramesh Thamilmani himself is scoring the music for the film, which has cinematography by Vishwajith.  The film, which will mark Dhoni Entertainment's foray into mainstream film production, is touted to be a family entertainer.  Dhoni Entertainment chose to commence its first film production with a Tamil family entertainer, reinforcing the immense love “Thala” has received over the years from the people of Tamil Nadu. Sakshi Dhoni, the brain behind the conce
Read more 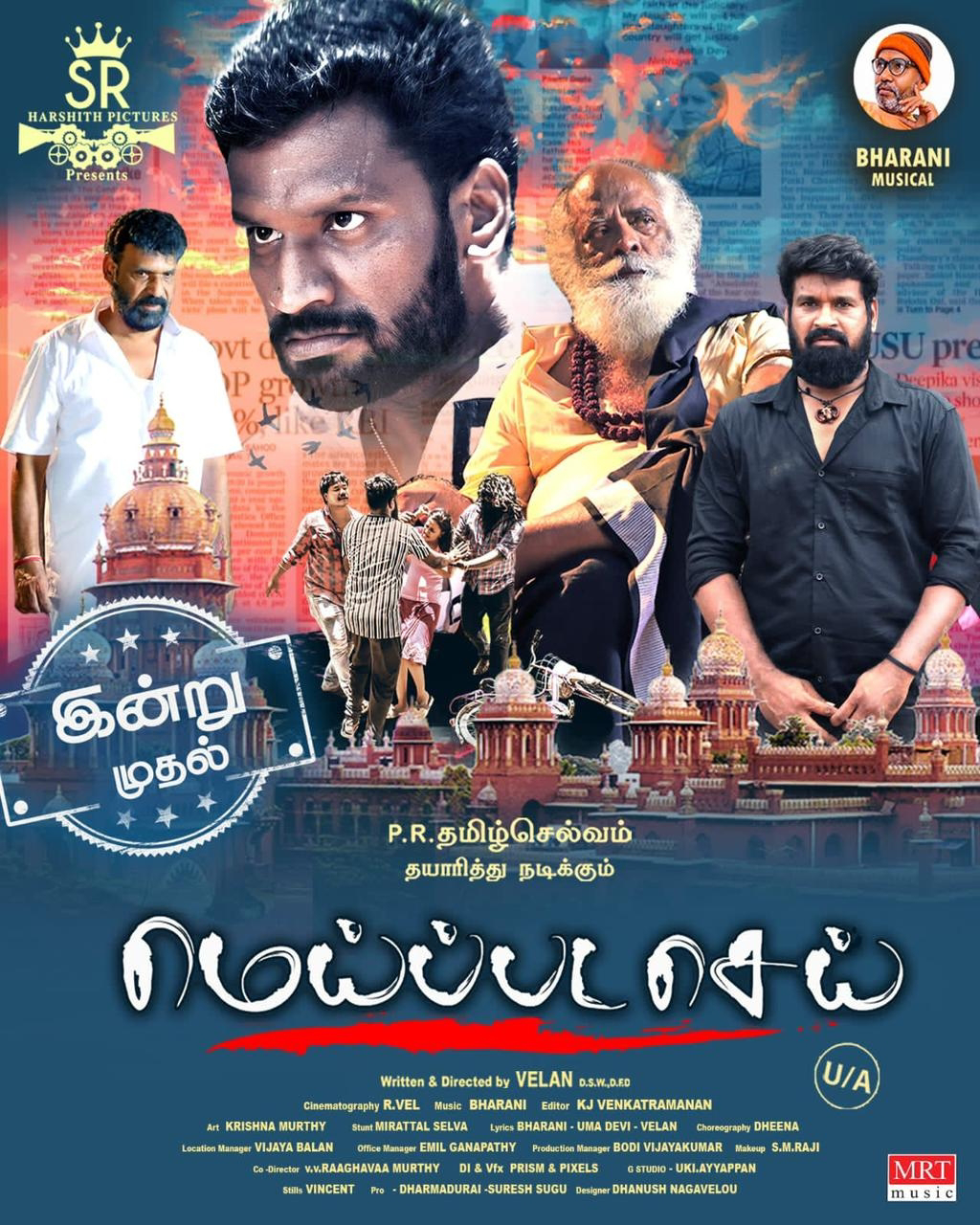 Meippada Pesu hits theatres today on Jan 27th. An unemployed youth who hangs out in the village with 3 other similarly unemployed, is in love with a young girl from a more well placed family. Her relatives oppose the union but the duo get married despite all opposition. All 5 then leave for Chennai in search of a better life.  But there they get involved in the discovery of a physical abuse and murder of a young girl and report it to the cops. However, now the big gang who are the culprits are  after them. Do they escape  their fate ? Or do they return to avenge the murder of the innocent girl? The actors have put their best foot forward with fine performances in the rural landscape. The villains too look menacing. The director has attempted to focus on meteing out justice to criminals of sexual crimes, in a way that they dont go scot free and repeat it. The scenes are not for the faint hearted. The fights by Mirattal Selva are well choreographed while the camerawork and m
Read more 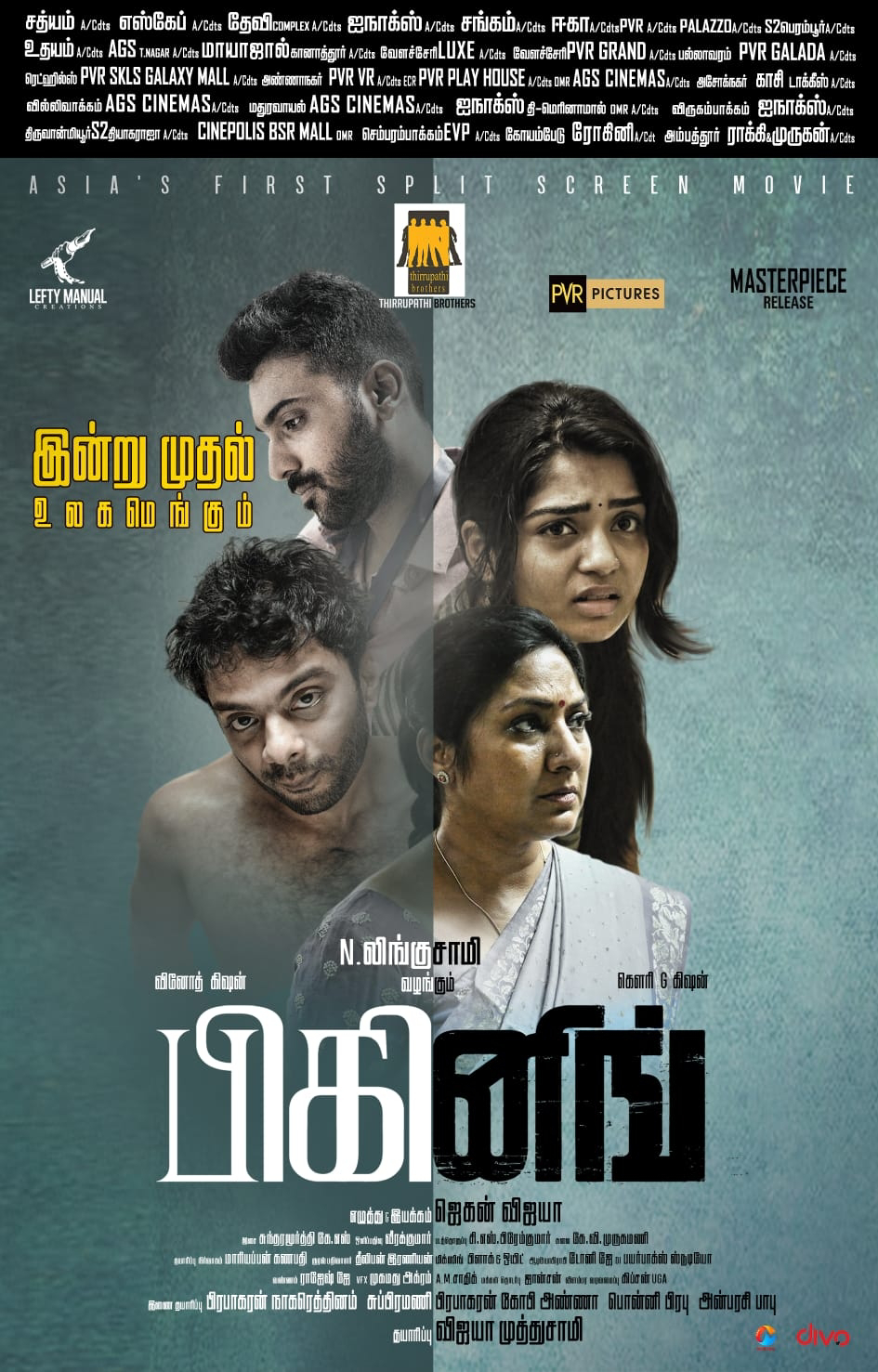 Director Jagan Vijaya's novel effort, Asia's first split screen Tamil movie, Beginning hits theatres this week.  The unique usp of the film is that on the split screen, 2 stories,run parallely and the viewer has to concentrate on both simultaneously. At one point,  the characters in both parts connect. What happens next? Balasubrami ( Vinoth Kishan in a brilliant performance) though grown up now,  is a person with special needs who is locked up in the flat when his caring mom ( Rohini) leaves for work daily. On the other side of the screen,  a young girl, Nithya( Gouri) has been kidnapped by youths, led by her spurned ex-lover Chandru( Sachin who nails the part). Somehow, Nithya manages to find a phone and ends up calling a random number which happens to be that of Balasubramani, who is in no position to help her due to various constraints. Does Nithya escape? What else do the evil doers have in mind? All the actors have done a brilliant jo
Read more 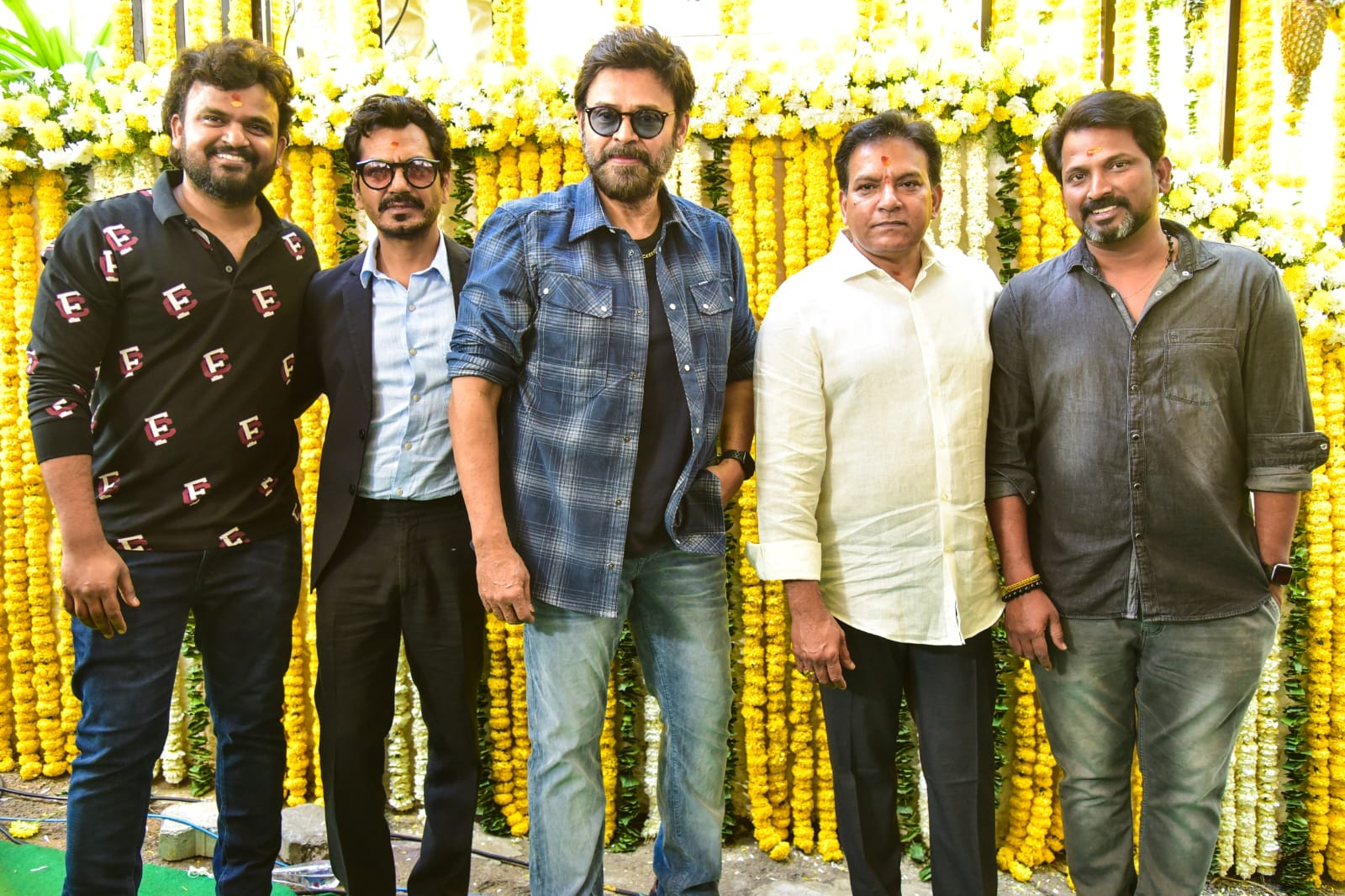 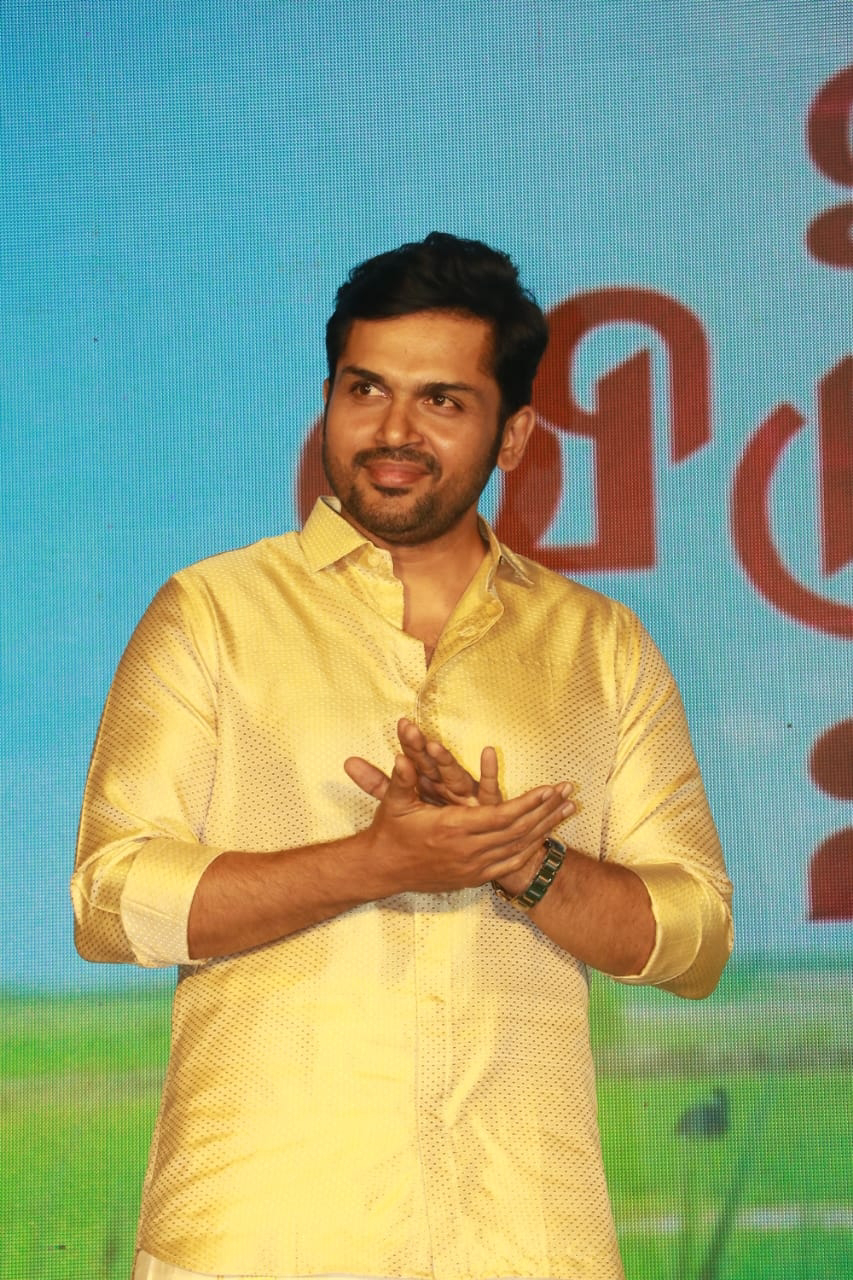