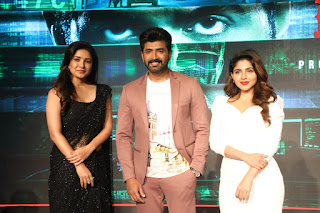 Globally, illegal duplication of content is one of the biggest concerns for content creators and the entertainment industry. They have been waging a never-ending battle against innumerable piracy websites. For the first time, the topic has been explored on a wide scale for viewers to understand the existence of dark alleys of piracy and networks that thrive on this illegal act. Known to bring forth unique and compelling tales, SonyLIV’s next Tamil original, "Tamil Rockerz", explores a one-of-a-kind story about piracy and its many tentacles through an engaging narrative. Directed by Arivazhagan, Tamil Rockerz will premiere on August 19th on SonyLIV. Inspired by real-life events, this fiction series will take viewers on the journey of a cop named Rudra, played by notable actor Arun Vijay. Rudra fights against time, unruly fans, and an anonymous network of powerful and dangerous cyber pirates to safeguard a massively budgeted and highly anticipated movie - Garuda. Tamil Rockerz
Read more
More posts