By Rinku Gupta The shooting of much awaited movie “Bommai” Starring SJ Suryah, Priya Bhavani Shankar , directed by Radha Mohan has got wrapped up. With the proper planning and execution, the schedule of this movie shoot went on a systematic manner and today the crew of “Bommai” celebrated the shoot wrap in a traditional way. Now the film has entered into post production which is expected to be finished shortly. 'Bommai' also features Chandini, “Doubt” Senthil, Aroul Shankar in prominent role. The movie is produced by V.Maruthu Pandian, Dr.Jasmine Santhosh, Dr.Dheepa T.Durai and presented by Angel Studios MH LLP Yuvan Shankar Raja has scored music & Cinematography is handled by Richard M Nathan. Editing will be one by Anthony & K.Kathir is the Art director of the film. Lyrics -  Karky Choreography - Raju Sundharam, Brinda Stunt - Kanal Kannan Dialogue Writer - M R Pon Parthiban Costume Designer - Subhashree Kaarthik Vijay, Poorthi Pravin Stills - Ra
Read more 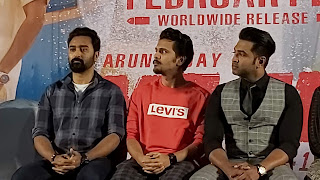 By Rinku Gupta Filmmaker Karthick Naren’s “Mafia”, an edge seated cat and mouse thriller is gearing up for worldwide release on February 21, 2020. Starring Arun Vijay, Prasanna and Priya Bhavani Shankar in lead roles, the film is produced by Subashkaran of Lyca Productions. The entire cast and crew were present for the press meet to share  their experience of working in this film. Actor Arun Vijay said, “My 25 years of journey in the film industry has been very challenging. I had to go through lots of hardships, ups, and downs. It’s all due to the immense support of my family, friends, media, and fans, I am able to sustain and give the best. Mafia has a phenomenal plot that has so much of intense characterization. It completely belongs to Karthick Naren, who had done a  great job on the script. It made our jobs easier without any stress. Prasanna has done an outstanding job in this film and his characterization will be highly noticed and appreciated. Priya Bha
Read more
More posts