Showing posts from February 7, 2020
Show All 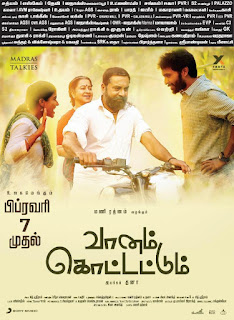 By Rinku Gupta Madras Talkies' Vaanam Kottatum is directed by Dhana with Mani Ratnam co- writing the script with his protege. When Bose ( Sarathkumar) commits a murder in a fit of rage, his wife Chandra ( Radhika) is utterly distraught. Wanting to bring up her kids Selvam ( Vikram Prabhu) and Mangai ( Aishwarya Rajesh) away from the world of violence, she moves to Chennai and makes a new life there. Through grit and hard work, despite the looming background of a father in jail, her children begin to rise in life. Just when things seem on an up- swing, Bose is released from jail. Conflict now arises when the siblings, now grown-up ,are unable to adjust to having a father around, interfering in their world. Bose too has trouble adjusting to a world which seems to have changed drastically. Chandra seems to left bearing the brunt in the midst of it all. Can the rising conflict created by these 2 clashing worlds within this small family, ever get resolved? Dhana has ex
Read more
More posts