SilambarasanTR gets a Surprise Gift! 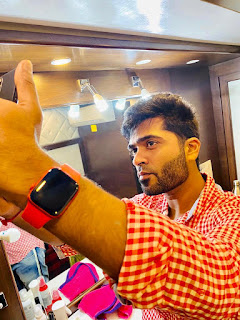 by Rinku Gupta Actor Silambarasan TR has been putting the lockdown to good use. He not only lost weight and got fitter, but also got going on two films, Eeswaran with Suseinthiran and now Venkat Prabhu's  Maanaadu. The actor who was hitherto reclusive is now active on social media as well, with regular clicks of himself appearing online, keeping fans happy.       Silambarasan's click from the vanity van                      On sets of Maanaadu  The latest buzz around him is the surprise gift he has recieved, from none other than his mom, Usha Rajender. It is well known that Simbu is a car lover. Now, seeing all the hardwork her son has been putting in these last few months, his mother had decided to give him a gift. The actor had received a brand new Mini Cooper car from his mom. The delighted actor is reportedly whizzing around town in the  latest addition to his car collection!
Read more
More posts