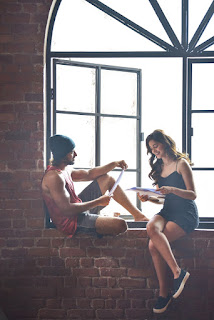 By Rinku Gupta Recent Filmfare Best Debut winner Ananya Pandey who made her Bollywood debut with Karan Johar's Sudent Of The Year 2, is now stepping into Tollywood. She is the heroine of the pan -Indian film directed by Puri Jagannadh and starring World Famous Lover Vijay Deverakonda . The project is produced by Jagannadh, Charmme and Dharma Productions of Johar who will release the Hindi version. Ananya is the daughter of actor Chunky Pandey. She posted on instagram her excitement to be part of a pan-Indian film and also welcomed Deverakonda to Bollywood.  The shoot had begun in Mumbai a few weeks ago.
Read more

- February 20, 2020
By Rinku Gupta National Award winning film Baaram is being released by Vetrimaaran's Grassroots Films and SP Cinemas. Director Priya Krishnaswamy has explored the practice of Thalaikkoothal in TN which loosely translates into 'mercy killing' where age old practices ( like inducing fever) are induced to give release from life to old, sick , suffering patients with no hope of getting better.  How this can be exploited for personal reasons by families, is highlighted in the story. The story features an aged watchman who gets injured in a freak road accident. His hip bone is broken but his egotistical and stingy son Senthil prefers to take him to his village, and keep him suffering and bed ridden in an outer hut. He refuses help from his cousins Murugan and Veeravel who even offer to look after the injured uncle whom they love. One day soon after his sister visits the imjured man, suddenly they hear that the old man died in his sleep. When they attend the funeral they lea
Read more
More posts