- July 11, 2019
By Rinku Gupta Thozhar Vekatesan is directed by Maha Shivan and produced by Kala Films. The story revolves around a young man Venkatesan ( newbie Hari Sankar) who is a proud entrepreneur selling home made sodas in his village. He meets Kamli (  Monica Chinnakotla) an innocent girl whose mother dies, and who resorts to suicide in order to escape a grim future, having been subject to overtures of lecherous men. Venkatesan offers her his home and soon a tender affection and deep love develops between them. Just when things are going well, tragedy strikes.  A Government bus runs over Venkatesan and his arms are amputated. He is told he can get compensation by his lawyer but his case runs on for 3 years before 20 lakhs is allotted by the courts. However instead of the money, a bus is given to him as compensation till the money due to him is paid up by the reluctant to pay  government. The bus turns out to be a white elephant and only adds to his woes. What happens to the young couple?
Read more

- July 11, 2019
By Rinku Gupta Bodhai Yeri Budhi Maari is directed by newbie Chandru SK and produced by Sreenidhi Sagar. The story revolves around Karthik ( doctor turned actor Dheeraj) who on the eve of his wedding visits his friend Roshan ( Roshan) and meets up for a drinking session with his buddies. There he ends up inhaling a deadly drug during a prank and from then on things go haywire for him.Several unexplained murders happen and he is trapped in the apartment, unable to leave nor fathom what's happening. There is a drug nexus, a cop ( Ajay) , a journo ( Pradaini ) and his fiancee ( Dushara ) and Roshan's lover ( Meera Mithun ) who are all part of the story, whose plot thickens as the film proceeds. How much is real and what is fantasy? What happens to Karthik? Does he escape the clutches of deadly addiction? Or is he trapped forever? The camerawork by Balasubramaniam is commendable especially in the confines of the apartment where most of the action takes place. Directo
Read more

Fresh Faces : Dushara : Acting is my piece of cake 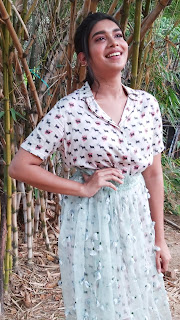 By Rinku Gupta She is the latest entrant in Kollywood with Bodhai Yeri Budhi Maari directed by debutant Chandru SK. A Tamil speaking bundle of talent from Dindigul, Dushara has a Telugu background. A student of fashion from NIFT, Dushara says she was drawn to cinema, ' I always felt acting is my piece of cake and I should do it. Cinema is my passion and I want to do bold an d versatile roles apart from commercial cinema.' She has already completed shooting for her second film Anbulla Gilli with Riseeast films, the makers of BYBM. All the best Dushara!
Read more
More posts