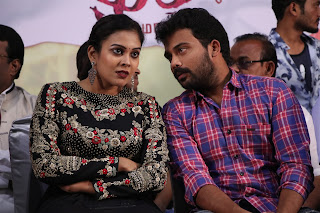 by Rinku Gupta It was an ecstatic  moment for hero Prithviraj father veteran actor Pandiraj as he attended the audio launch of his son's film. " This is the first time my wife is attending an audio launch with me since its her son's film. She would never come for my film functions! "he quipped in a fun -filled speech at the Kadhal Munnetra Kazhagam ( KMK) event. " This is my first period film. I play a teacher. There are a few complexities to my role with great scope for acting. Working with Prithvi was great," revealed Chandini when quizzed about her role in the film prior to the event.  The film is produced by Bluehills  productions and the film is directed by Manicka Sathya. Music is by PC Shivan. The cast is made up of Sungampuli, Ganja Karuppu and Sivassenathipathi amongst others. Actor Aari attented the event along with other digniataries Balaji Tharaneetharan, PL Thenappan, Srikanth Deva and others. Aari  spoke about the impo
Read more
More posts