Madhubala and Prabhu back together for College Kumar 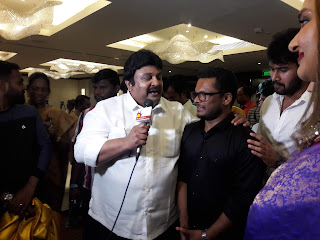 by Rinku Gupta Actor Prabhu Ganesan is celebrating his 37 years in cinema with yet another film  Directed by Kannada director Hari Santhosh , the film has newbies Rahul and Priya  as the young lead. Titled College Kumar, the film has Prabhu playing a dad with Roja fame, evergreen Madhubala, playing his wife. The film is set in a college campus and will address many contemporary issues plaguing  youngsters sats the director who is upbeat about the casting. At the grand launch, Madhubala, who was recently seen in AgniDevi, was thrilled to be pairing with co-star Prabhu again. ( click here for  Madhubala's bytes on her role and the film) .
Read more

by Rinku Gupta Debutant filmmaker Barath Neelakantan's K 13 is already censored and the producers have planned to release the album soon followed by the films theatrical release for this summer. Producer SP Shankar of SP Cinemas says, “What everyone saw in the teaser can be referred as looking through the peephole of the  K 13 door, for there are lots of unexpected dramatic events to be unleashed as it opens. This was something we decided for the trailer as a psychological means to prepare the audience in accordance to the film’s theme. We were happy that our intelligent audience got the actual grammar of the trailer and we could see many commenting on the shots that has few characters getting introduced through a peephole. We are planning to launch the songs shortly and are eyeing for a worldwide theatrical release this summer.” Adding more about the performances of the star-cast, Santha Priya of SP Cinemas says, “This might look time-worn as we as producers are cont
Read more
More posts