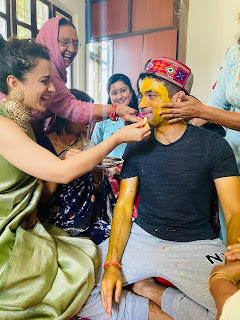 By Rinku Gupta Actor Kangana Ranaut has been real busy post the schedule of Thalaivi. After the shoot down South, she went back to hometown Manali to celebrate the pre-wedding festivities of her 2 brothers, Aksht and cousin Karan. Kangana  at brother Aksht's traditional Himachali Badhai ceremony at maternal grand- parent's home Kangana at her brother Karan's haldi ceremony Sharing a video of the ceremony of brother Karan's Haldi, the actor tweeted today,  "After Rangoli’s wedding for more than a decade there was no wedding in the family all thanks to me but today my brothers Karan and Aksht broke the jinx and our ancestral house is drowned in wedding festivities, two weddings in three weeks starting with Karan ki Haldi today " The actor celebrated the haldi ceremony with family and close friends. She shared the two different looks of both days, on her social media handles. Kangana at Aksht's Badhai ceremony   She tweeted that she wore her mother's jhu
Read more 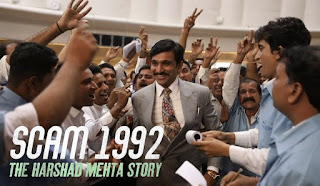 by Rinku Gupta Streaming now on Sony Liv , Scam 1992 The Harshad Mehta Story is easily amongst the most gripping and interesting shows on the OTT platform.   Produced by Applause Entertainment and directed by Hansal Mehta the 10 episode web- series is based on the book by journalist Sucheta Dalal who traced the rise and fall of the ambitious stockbroker and financial wizard Harshad Mehta, who rose to fame in the 90's.  Tracing the story would be a spoiler  so we wont get into the details. Many factors make this web-series a not- to- be missed experience. For one,  the way the events are narrated, even those who are unfamiliar with the  workings of the stock market, will understand what's going on. Another strong point is the emotional connect with each character,  which keeps you strongly invested in the story from start to finish.  This is also largely possible due to the excellent casting by Mukesh Chhabra. Be it the lead artists, or supporting cast, right up to every jobb
Read more

Bobby Simhaa's next is a gangster flick! 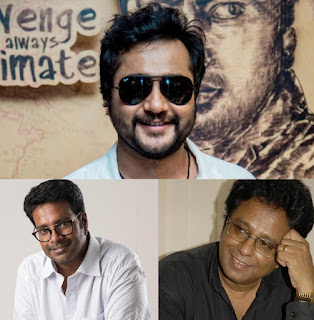 By Rinku Gupta After being seen and appreciated  in Karthik Subbaraj's OTT short film as part of the anthology, Putham Pudhu Kaalai,  on Amazon Prime, Bobby Simha is readying for next, a full length feature film. His  next will be a gangster thriller. The film is to be directed by Vikram Rajeshwar, the son of well known Tamil cinema writer and director K Rajeshwar ( Aval Appadithan, Paneer Pushpangal, Kadalora Kavithaigal, Amaran, Nyaya Tharasu, Kovilpatti Veeralakshmi etc).  Vikram  will make his debut as a director with this film, the story of which has been penned by his dad. Vikram has made a name for himself in the ad world prior to this.  The shoot is to begin in 2021.
Read more
More posts