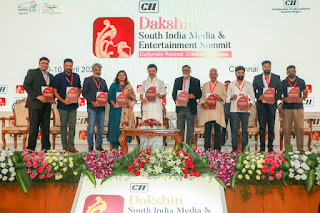 The Hon’ble Chief Minister of Tamil Nadu, Mr M.K. Stalin in his inaugural address at the “CII Dakshin 2022 – South India Media & Entertainment Summit” organized by Confederation of Indian Industry (CII), Southern Region said, “We remain committed to supporting the media and film entertainment industry. We further assure the cinema industry the Government will provide the necessary infrastructure needed for the growth of the industry”. “In the past 11 months of being the Chief Minister, the Government has controlled to a large extent COVID-19 allowing more and more people to enjoy movies in theatres. The economy is now improving and is heartening to witness lakhs of members from the media industry are being employed once again”, he added. The Hon’ble Chief Minister urged the  movie directors to keep in mind youngsters are influenced heavily watching movies and social messages highlighting the menace of drugs and tobacco can be incorporated in their dialogues. The Hon’ble Chief Minis
Read more 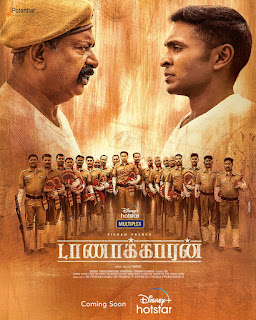 The Potential Studio's Vikram Prabhu starrer Taanakkaran co-starring Anjali Nair, Madhusudhan, Lal, MS Bhasker and others, dropped on Disney Hotstar on April 8th. The film revolves around Arivu ( Vikram Prabhu) who fulfils his father's dream of being a cop and lands up at the police training school (PRS). There he finds that corruption and discrimination is rampant, with senior cops all part of the system.  Many others like him find their hopes getting quashed especially due to a tyrannical and vengeful trainer Eshwaramurthy, ( Lal) who represents the system which refuses to change. When trainees die due to the harsh training aimed to break them,  Arivu rises to the occasion in a bid to break this system. Does he succeed? Director Tamizh takes the viewer right into the lives of the trainees, showcasing their desperation to hang on to the job despite the inhuman treatment meted out. Watch out for the intro scene info on the formation of the police force by the British. Vikram P
Read more
More posts