Showing posts from February 3, 2020
Show All 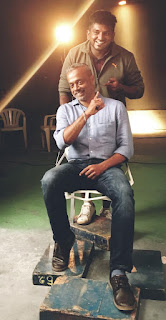 By Rinku Gupta ( subscribe to cinemaspeak for video updates) Rom-Com flicks have always been the most loved piece of work that instantly arrests the attention of universal audiences when delivered with perfect formula. In this aspect, Ashok Selvan-Rithika Singh starrer Oh My Kadavule has showcased an exquisitely elegant appeal with its visual promos and songs. Apart from these colorful and amazing elements, the film has generated a groovy spell of attractiveness for its star-cast, especially the pivotal role played by Vijay Sethupathi. And now, there’s yet another embellishment to the film as filmmaker Gautham Vasudev Menon will be seen appearing in a cameo as himself. Producer G. Dilli Babu, Axess Film Factory says, "There are few sequences in the film that involves the shooting spots and one among them had to feature a prominent artiste as filmmaker. Eventually, we felt that the presence of someone very famous in the directorial panorama would be an additional value.
Read more
More posts