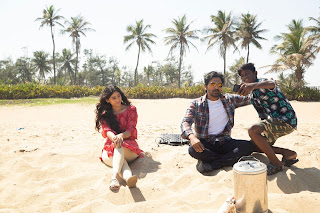 Vaibhav plays a boy  who works by day but has to be home by dusk as he suffers from night blindness and cannot see after the clock strikes 6pm. He lives with his parents. One day he meets and falls for a TV anchor, played by Pallak. She is not aware of his malady.
An incident at a protest march inadvertently lands our hero within the cross hairs of a wicked politician who is also unaware of his malady and is baying for his blood. As he keeps his malady well hidden, it leads to various situations, some funny , some dangerous. How does he get around them? Does his love learn about his predicament? Do they end up together?


Sixer is made in the spirit  a light- hearted comedy ( despite the hero's serious condition) with a mix of  some funny laugh-out-loud scenes, some  slapstick(  as the fights for instance) and some witty ( scenes with the parents, Radha Ravi, Sathish..).Vaibhav is the perfect choice with his comic timing and reactions on track. Sathish's one liners work well while Radha Ravi makes his presence felt in a humoroys avatar.One wishes there had been more fun scenes with the unconventional screen parents Ilavarsan and Sriranjini. Palak is a good addition to Kollywood.

But the songs slow down the film. One wishes that young , new  directors would think out of the box and go beyond the trope of the usual muscle men, politico villains, 20 baddies vs the hero the usual love at first sight romances, etc, which gets tedious to watch in film after film at times. The depiction of mental illness also could be handled with more sensitivity instead of comedy.


Overall, Sixer, despite its speed breakers, manages to come through as a comedy for the family audiences.