The film revolves around Prakash ( Pradeep), an IT exec caught up in a claustrophobic world of family, job and a lack of in- depth relationships. What happens when he meets  two young women and a child, and how his world turns around completely as a result, forms the story.

Caught up in an unpredictable web of circumstances beyond his control, life forces him to come to grips and take charge , in the midst of the chaos he finds himself in.  Does he succeed?

Take  each day as it comes,  live for today and let tomorrow take care of itself seem to be the essence of what Arun Prabhu tries to convey.

The actors ( TJ Bhanu, Aarhav, Diva Dhawan)  play their parts well with ample support from the interesting cameos sprinkled in between. 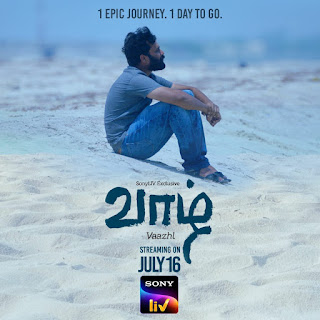 The camerawork by Shelley stands out as does  Pradeep Kumar's music and Raymond Crasta's editing in this travelogue led narration.  Several of the visuals are breathtaking, adding to the focus of the story,  of breaking free of shackles and finding yourself. Travel, is a recurring theme all through with  even the secondary  characters being pushed to different parts of the world, from America to Thailand. As a nod to this theme perhaps, even a principal character, the child in the film, is called, Yaatra which translated, means journey. The writing also takes a dig at modern day relationships, lifestyles and choices, holding up a mirror to society.

The slow pace at times and absence of a usual storyline as well as few all -too -convenient situations and solutions, may prove to be a dampener.The screenplay, though amply dotted with gripping suspense, is not the usual and may take some getting used to.

But overall a film that leaves you with a message to push your boundaries, to seek, and to find - a world beyond your horizons.