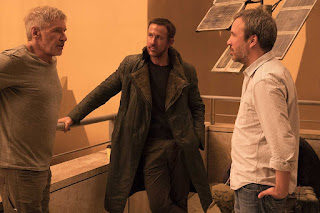 35 years after the cult classic, the  neo- noir, sci-fi, Blade Runner ( 1982), directed by Ridley Scott, comes Blade Runner 2049. The original film’s primary basis is believed to be a book , Do Androids Dream of Electric Sheep written by American writer Philip K Dick in 1968.
Story :
Set in the future, the story centres around a young Replicant blade runner,officer  K  ( Ryan Gosling) of the Los Angeles Police Department. He  runs into a secret that causes an upheaval in his world. He begins to question his very existence and where he comes from. His search into the past leads him to Deckard ( Harrison Ford) and a journey of life-changing  self-discovery.

Zooming in:
The background and complete futuristic ethos is wonderfully constructed and draws you into the story. The futuristic sets of this sci-fi flick make a fascinating background with some remarkable visuals, but without taking your attention away from the plot. One of the highlights is the way the camera lingers on each expression, the philosophical soul searching all shown at an unhurried pace, drawing you into the world of the Replicants and the dangers our hero faces at every step. You begin to feel his anguish, fear, lonliness and confusion, upping the suspense factor bit by bit as to what’s going to happen next. The turmoil the characters go through is well brought out and is a highlight of the film.  What does it mean to be human, to have free thought…are some of the questions it throws open for the viewer to dwell upon.

On the flip side,  the 3D film’s dark glasses don’t really help as they only seem to add to the generally dark and somber moods and colors on screen. At around 2 hours 40 minutes of run time, it could prove a tad long for some.
……………………