Billa Pandi as the name implies is about  a character by that name ( RK Suresh) who is a huge fan of Ultimate Star Ajith Kumar. The man is a good hearted person keen on following the ideals of his idol Ajith. Hence he even takes on the moniker Billa to his name. 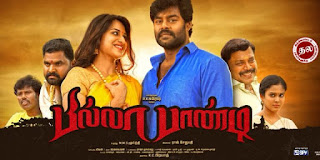 He is in love with a village belle ( Chandini Tamilarasan) whose parents oppose the match since Billa Pandi is a mason who spends his money on helping others with  not much left to make ends meet.

To his utter amazement, when Pandi is working on a house, the owner's grand -daughter ( Indhuja) declares her love for him, impressed by his good nature. All hell breaks loose and her parents take her away from the village to fix her marriage elsewhere. Dismayed, she jumps off the car on the highway, killing her father and ending up with brain damage. She is now reduced to living with the mind of a 7year old. 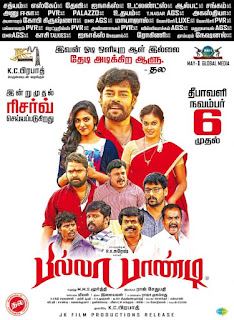 How this incident causes a total upheaval in Pandi's life is the story. To disclose more would give  away spoilers.

The film makes no bones about  spilling adoration for Ajith in every way possible right from the word go. The hero lives by high ideals, inspired by Ajith's reel and real persona. Producer turned actor and now hero, RK Suresh handles his role with ease, slipping effortlessly into the role of the loud, brash youth with a heart of gold. Romance, action , sentiment or dances, he fits into the rural landscape, doing justice to all aspects. Heroines Chandini and Indhuja play their  parts well as does Thambi Ramaiah, bringing up the  laughs. The screenplay moves swiftly with no room for lag.
There are several messages in the film, brought in without preaching, by the director.

On the flip side, the volume can get too loud at times with some characters going over the top with decibel levels. Some situations look contrived and put together for convenience of the plot.

Overall Billa Pandi is bound  to appeal to rural and family audiences in this festive season, as also to Ajith fans.