The story revolves around a girl Rashmi ( Dhansikaa) who by accident captures a murder on her phone at a resort on New Years Eve. When her fiance Aditya ( Thakur Anoop Singh) returns to the room he finds her missing. Tense moments later he manages to reach her on the mobile and she  reveals that  shes caught in the trunk of a moving car  while escaping from the goons who spotted her filming thier crime and want the proof back. 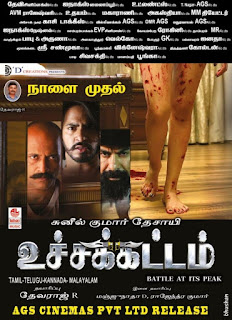 From then begins a cat and mouse game of a chase between Aditya searching for his love, who gets into the clutches of the evil kingpin Dharmendra ( Kabir Duhan Singh). Several forest chases and stunts later, the hero and villain meet only to find that Aditya has an old score to settle with him as well.Who will win ?

The stunts are many and at every few minutes a powerful  muscled baddie enters the scene, with Anoop Singh fighting them all. Lots  of blood, gore, flying knives and screwdrivers inflicting  deep wounds abound. However, for lovers of car chases and stunts  the film is a fruitful watch. Dhansikaa has performed well and has a meaty role as the gutsy girl caught in a tough situation, even gets her fingers chopped off,  but uses her wits to escape every time. Shraddha  Das as a scheming character and Tanya Hope as the girl caught up in the midst of it all, do justice to thier roles.  Its a perfect role for Anoop Singh to show off his prowess as an action hero while Kabir Duhan Singh is really menacing as the villain. Both are well cast but Kishore remains  largely under utilised.  There are thrilling moments aplenty but the one too many stunt scenes get repetitive after a while. The cruelty of the lead villain is also a tad too much to bear.
The director has decided to stick to the plot without deviating with song and dance or comedy, which is commendable.
But some scenes look too convenient and situations contrived. On the upside, the visuals are a treat with the scenic landscapes amidst which the film is set.