- April 27, 2019
by Rinku Gupta
One of the most awaited films in the franchise, its also the film fans will be most emotionally attached to as it marks the end of an era.
Avengers Endgame is an experience and without giving away any spoilers here, one can say that its an emotional ride that will keep the tear glands working from time to time as memories come flooding back with references to how things were for the Superheroes in thier prime, in past films. 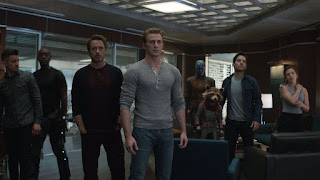 There is warfare and the fight between good and evil, but its driven with a gravitas, after much reflection, self-doubt and nostalgia, heroism and a leap into the unknown. All this makes for some great viewing time as you get to feast on each of the Super heroes, their past and present, thier weak and thier strong moments, with moments of self-decripating humor and witty one liners thrown in. There is regret but also acceptance, angst but also joy in doing whats needed and right for the world. And of course, for his fans,
Thanos in all his glory is at the centre of it all. Watch out for a stupendous climax scene amongst other things.
A fulfilling watch!