Theclatest production house to enter Kollywood is New Saravana Stores Brammandamai which is now entering  film production under this banner.

Their debut  film, temporarily called “Production No. 1” has popular Saravana Stores owner, ( who is well -known for modelling in his store advertisements with popular heroines), Legend Saravanan , now debuting as an actor and producer in Tamil Cinema. The film is  written and directed by famed duo JD & Jerry .
( click here for full video of celebrities at the function!)

The camera’s  started rolling for this venture on 01 Dec, at AVM Studios, Vadapalani , with the blessings of AVM Saravanan who  lit the inaugural lamp. Ace director S P Muthuraman inaugurated  with the first clap.
Legend Saravanan plays the lead with Geethika Tiwary who also debuts alongside him in this movie, which has  music scored by Harris Jayaraj. 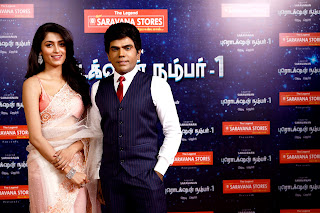 This grand saga has the likes of Prabhu, Vivek,
Vijayakumar, Nassar, Thambi Ramiah, Kali Venkat, Mayilsamy, Latha, Kovai Sarala, Devi Mahesh, who along with many other artistes , will play important roles.
It is also said that another popular heroine will also play a critical role in this movie.
Velraj is trusted with the Cinematography, SS Moorthy with the Art, Ruben with the editorial responsibilities, while
Kaviperarasu Vairamuthu as written the first song. Pattukkottai Prabakar has written the dialogues.
The movie is planned to be shot at some exotic locations in  the world, apart from  besides Chennai, Pollachi, Himalayas and a few overseas locations.
The cue from the Director Duo JD and Jerry about the movie is “Expect the Unexpected” .