There are always great expectations from director Mysskin's films which  are recognised by their particular template, with his brand of music, sound, characterisation, ethereal camerawork, poetic story telling and a gripping screenplay. Psycho ticks all the boxes this time too. But how does it work overall? 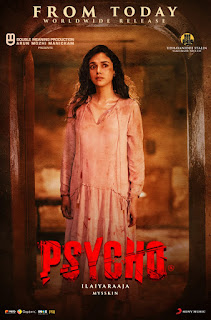 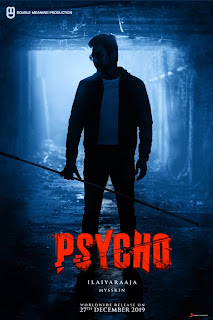 Udayanidhi Stalin plays Gauthaman, a visually impaired, musician who falls for an RJ, Dhahini ( Aditya Rao Hydari). But in a twist of fate, while waiting for him on a lonely train station late at night, ( as an indirect result of his stalking her to convince her of his love) she is kidnapped by a psychopath who has beheaded more than a dozen women. The police have made no headway. Time is running out. But Dhahini's body does not turn up like the others, giving Gauthaman  a clue that she is alive. He is now determined to find her, using every clue he can get. He even meets a quadriplegic ex -cop , Kamala Das ( Nithya Menon playing the foul mouthed, frustrated cop with a heart of gold to perfection) whom he convinces, to help solve the case. Do the duo save Dhahini?


Udayanidhi gives a measured performance befitting his role. Aditi Rao looks pretty and fragile but has not much to do overall but  she  displays the fragility and vulnerability of her character quite aptly.  Nithya Menon bags a meaty role and bites into it with gusto. But the epithets and rude behaviour seem a tad forced, just for effect at times.

How a visually impaired man is shown driving a car at full speed on the highway ( though making for edge of the seat visuals), is puzzling to say the least. Singampuli as the trusted Man Friday is well cast.


The villain Ramkumar Pitchumani as Angulimaali is a good find and aptly fits into the role displaying the right amount of primal ferocity and vulnerability towards the climax.
The film attempts to not just stop at being a crime solving thriller, but attempts to look into what makes psychopaths what they become.

Watch out for the back story towards the end.
Mysskins pays tribute to Alfred Hitchcock's film Psycho, and his villain too is a traumatised soul with inner demons to fight.

The music by maestro Ilayaraja sets the mood and is top notch, with silences telling their own story. Tanveer Mir's camera work is in perfect synch with the director's vision, excelling especially in the night effects, which add to the mood of the film.

The film is not for the faint- hearted with brutal beheadings, skulls, blood and ample gore to leave lasting impressions on the mind.

The sin and punishment angle ( in a tribute to the original book / film Psycho) and its after effects, the cause of psycological problems and who is really to blame, are some of the issues Mysskin seems to point at via the film, perhaps in a bid to hold a mirror to society.
The Stockholm Syndrome thatAditi Rao's character seems to display and the confessions of the serial killer, seem to be a step in that direction, to set audiences thinking about the role of society in tipping the delicate mental balance of tender minds.

Questions like why no CCCV cameras ever captured the public placements of corpses, allowing the killer to work freely, crop up when watching the film. The cops too are shown in a rather clueless light. Ram as the senior officer shows promise but nothing comes out of it. Why the killer goes about the type of crimes he does is not explained.
Overall, a Mysskin film with loads of layers and enough chills and thrills to keep you engrossed and the grey cells working overtime.  Nothing is as it seems in Mysskin's world and yet again he draws the viewer into a rather more brutal than his earlier films universe.