Shri Krish Pictures' Adavi is directed by Ramesh G, who has also played a villainous cop in the film which stars  Vinod Kishan ( remember the boy actor in Nanda?) and Ammu Abirami in the lead.
The film is set in a small village in a scenic mountain, where the villagers are  hounded to leave their settlement by a greedy land grabber who wants to make a huge mountain resort for profit. He is aided by the local police and his own goons to chase out the villagers who have been living there for generations and for whom the mountains are thier home and source of livlihood. When the youngsters of the village get drawn into this issue, it escalates and all the villagers are tortured by the fraudsters. What happens to the innocent village folk? Do the greedy villains get their way? 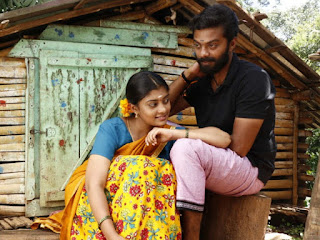 The basic premise of the story deserves kudos. Director Ramesh G seeks to throw light on the gradual deforestation issue which has a cascading efffect on the environment and the food chain, detrimental to humans and animals alike. The voice over given by Parthibban at end, quoting statistics is a good move.

The lead pair Vinod Kishan and Ammu Abirami have done a good job and their romance portions make for interesting viewing. One of the characters explaining the importance of the forests to his child, gives a good overview  of the issue which is the film is trying to highlight.  The visuals are good, capturing the beauty of the mountains and valleys beautifully.
On the flip side, the synch between the present and the flashback portions is confusing in a few places. Too much time is spent in repetitive dialogues of the villagers suffering and too many close up shots of people is a strain  to watch. There is a reference to a supernatural element in the beginning which seems to be abandoned later, and its unclear why.
Overall, a decent attempt to highlight an important environmental issue, the need of the hour.
Adavi Adavi review