In his next outing, Dagalty, Santhanam plays a con - man called Guru who lives in Mumbai. A rich man in Mumbai ( Tarun Arora)  has an unusual habit. He draws faces of women on a whim and then sends his staff on chase to look for a woman who looks exactly like the painting, all for an astronimical sum of 10 crores this time. Guru manages to find a girl who ressembles the photo and heads to Tiruchendur to bring the girl Malli ( Ritika Sen) to Mumbai on the pretext of fulfilling her dream of directing a film.
But things go south when he has a change of heart when he learns the truth about her impending fate.  How does he now rescue Malli from the millionaires clutches? 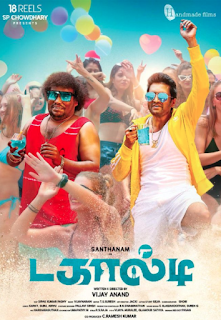 Santhanam  has cut down on the punches and one liners to a minimum in the film, keeping the ' heroic' acts in check,  so as to make it watchable.  There are some funny scenes here and there, the climax scene with Bramhanandam and the farcical cat and mouse game with the millionaire's henchmen that are engaging. But for the most part, the sequences involving the journey from Thiruchendur  to Mumbai, with Malli's gullible acceptance of a stranger's words, ( in a loose ponnu template) are repetitive and dragging.
Why the millionaire pays such sums of money for a girl and even returns from New York, is puzzling to say the least. To his credit, the production values are good and as are the performances of the cast. Yogi Babu as Guru's friend genetates a few laughs here and there but enough to keep the momentum

Director Vijay Anand could have pegged up the comedy several notches to make Dagaalty a more watchable film.